Located at the north eastern tip of Flinders Island this location provides an ideal chance to explore both the lagoon settings of the inlet and also to look across to the Sister Islands.

By exploring the coastal processes happening around us today we can get a key insight into how sedimentary rocks have built up in the past.

The best way to begin to understand the stories of rocks that formed on the earth’s surface, is to look around us at the landscapes we explore today.

The process of creating new rocks goes on tirelessly. Places like the North East River estuary can tell us much about how some of the island’s more recent sedimentary rocks were created.

As the sea levels rose up to its present height after the end of the last ice age, currents moving along the coast have deposited large ridges of sand.

This sand movement has created the lagoon we see today at the mouth of the North East River. 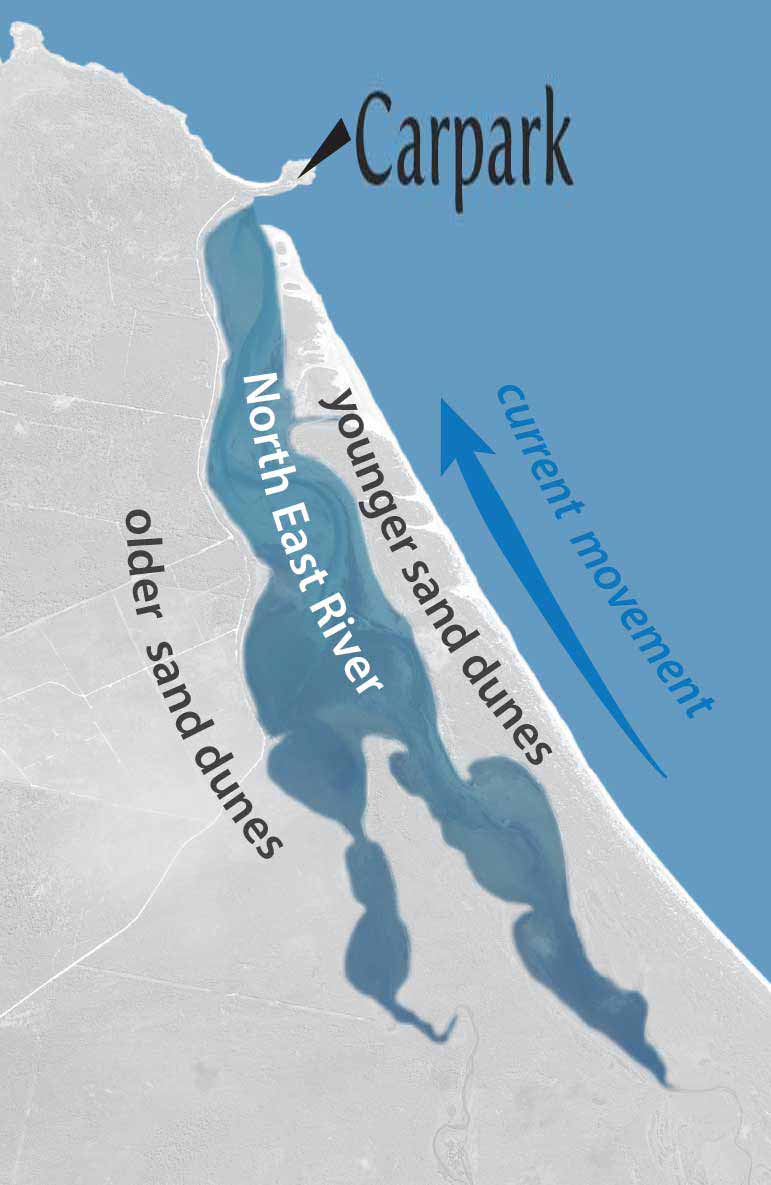 Within the lagoon system it is possible to see the sedimentation process in action as sand transported by wind and the river mix with organic matter from the surrounding vegetation.

In time, these sediments will build up to create new deposits and will be slowly cemented into sandstone.

The rocky shoreline at Stanley Point is a great place to explore the 380 million year old granite that occurs here.

When you get out at the carpark at North East River, it is interesting that the rock you are standing on was once a small island.

Since sea levels rose after the end of the last ice age these rocky outcrops have deflected the sea currents and waves, allowing sand to accumulate.

Eventually a sand bar or isthmus formed and re-joined Stanley Point to the mainland.

A feature of a trip to North East River is the view you get across to East and West Sister Islands.

These were one of the very first features to be recorded on a map here, though to look at them from the mainland is to get no clue as to why they might have earned their name.

To appreciate this you need to see the view of The Sisters as drawn by Peter Fannin from the deck of the H.M.S. Adventure in March 1773.Here he notes that they "appear like so many sails as you come from Cape Barren."

The appropriateness of the island's title was commented on by Matthew Flinders in 1798 when he noted that "The Sisters were very well named by Captain Furneaux, being much alike: they may be seen eight or ten leagues."

The present day coastline around Flinders Island is a result of sea levels rising and stablising at their present day level around 6,000 years ago.

Unlike the rocky shorelines to the south and west of Flinders Island which remain today much as they did when the newly encroaching sea waters arrived on their doorstep, this area along the eastern edge of the island has changed a great deal over the last several thousand years.

This is as a result of sand dunes building up and creating the lagoon embayments at the rear of the beach setting.

This is a fairly typical process in shallow, shelving marine environments. When we look underwater offshore today, we can see previous examples of this process in ancient shorelines that are now inundated on the floor of the ocean. 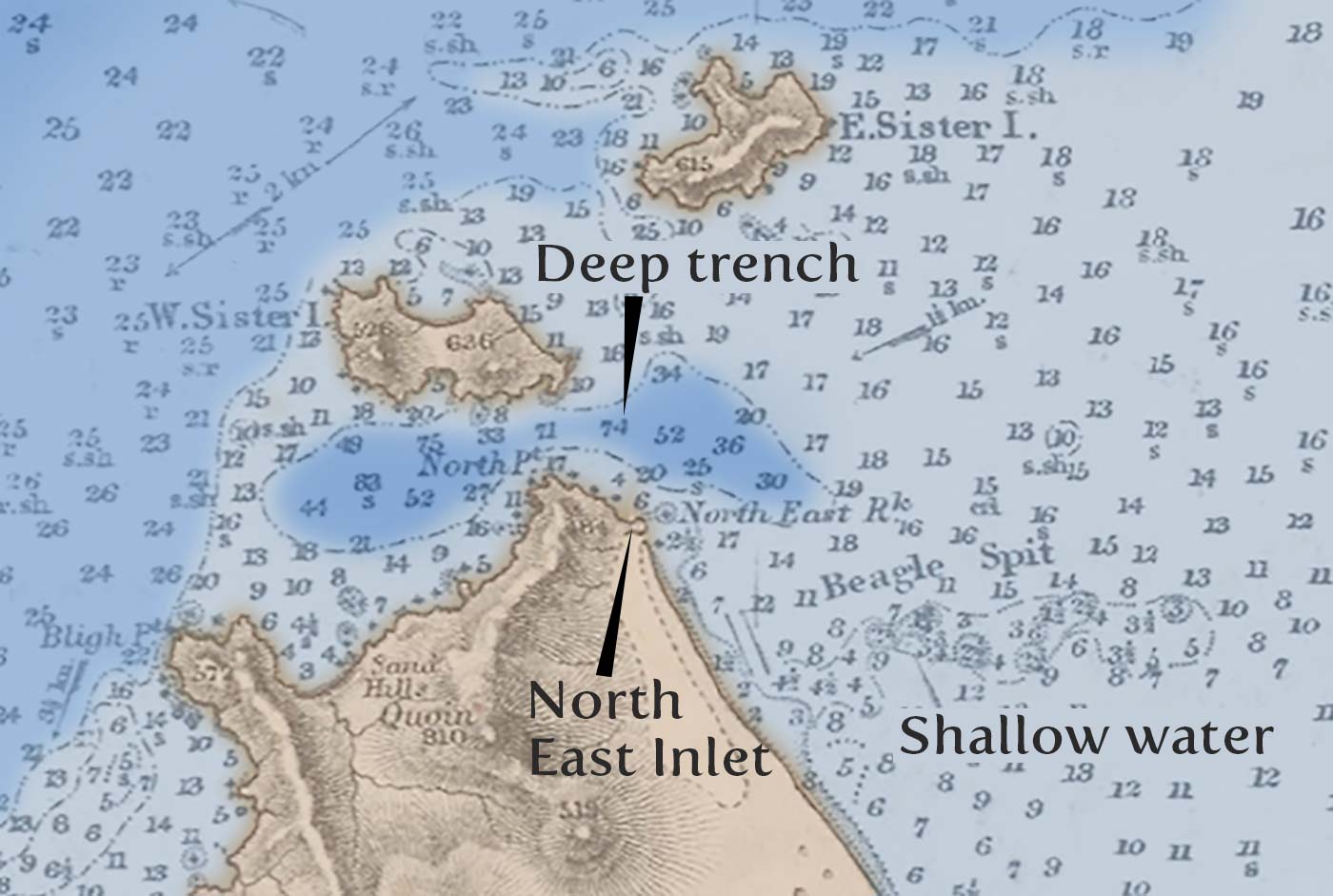 The original 1840s marine chart of the Furneaux Group is especially interesting in this as it shows the gradual increase in water depth (in fathoms) out from the north east corner of the island.

What is remarkable about this chart however is the strange feature of the deep slot that carves into the seabed between here and the Sisters islands.

This is the deepest water that occurs anywhere in Bass Strait and to find greater depths locally you need to go east across to the edge of the continental shelf drop off.

An additional stand out feature of this precinct are the granite outcrops that mark out both the shoreline and adjacent hills.

As well as being easily spotted as you move around, they stand out clearly in the various geological maps of this precinct produced since the 1870s. 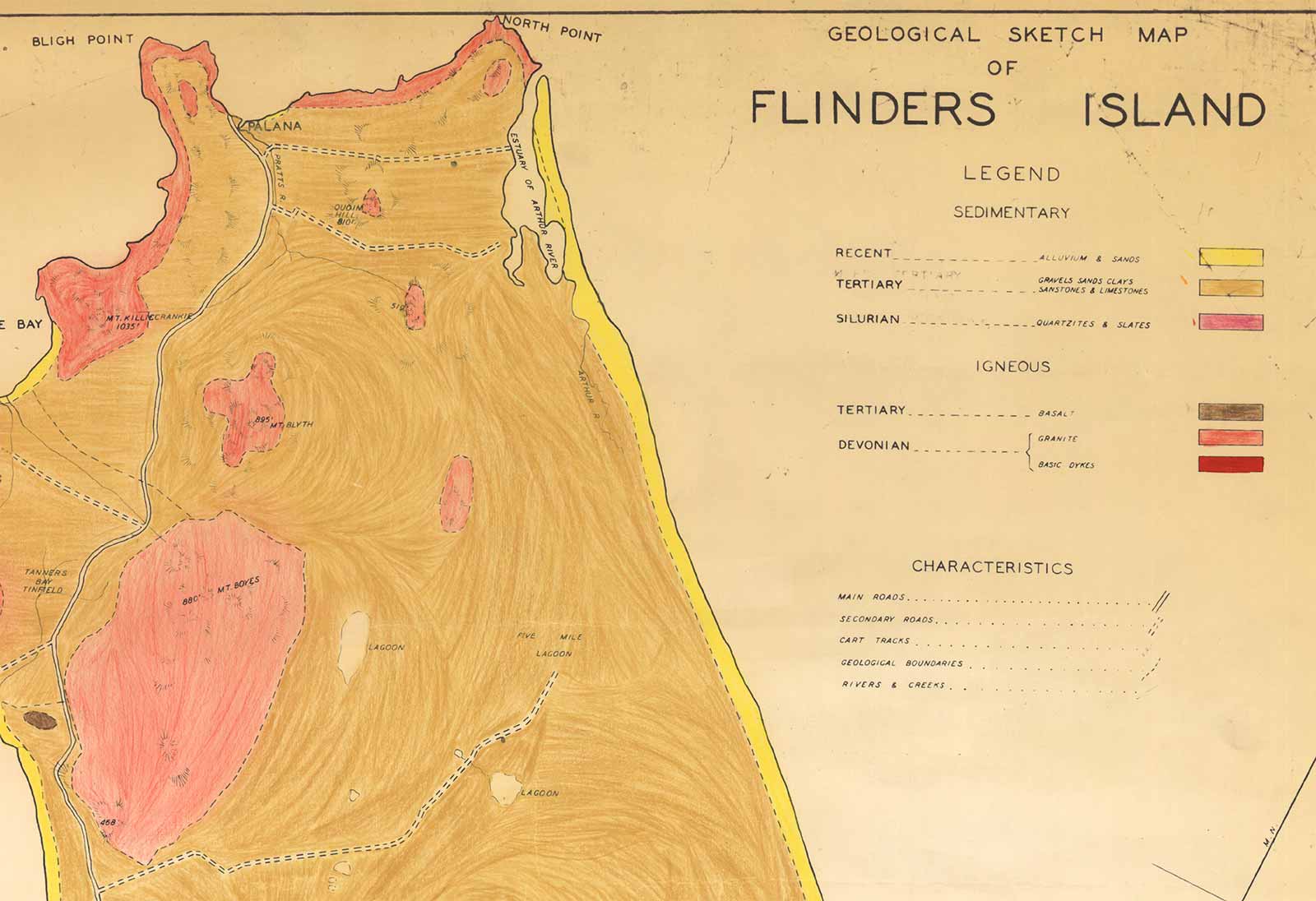 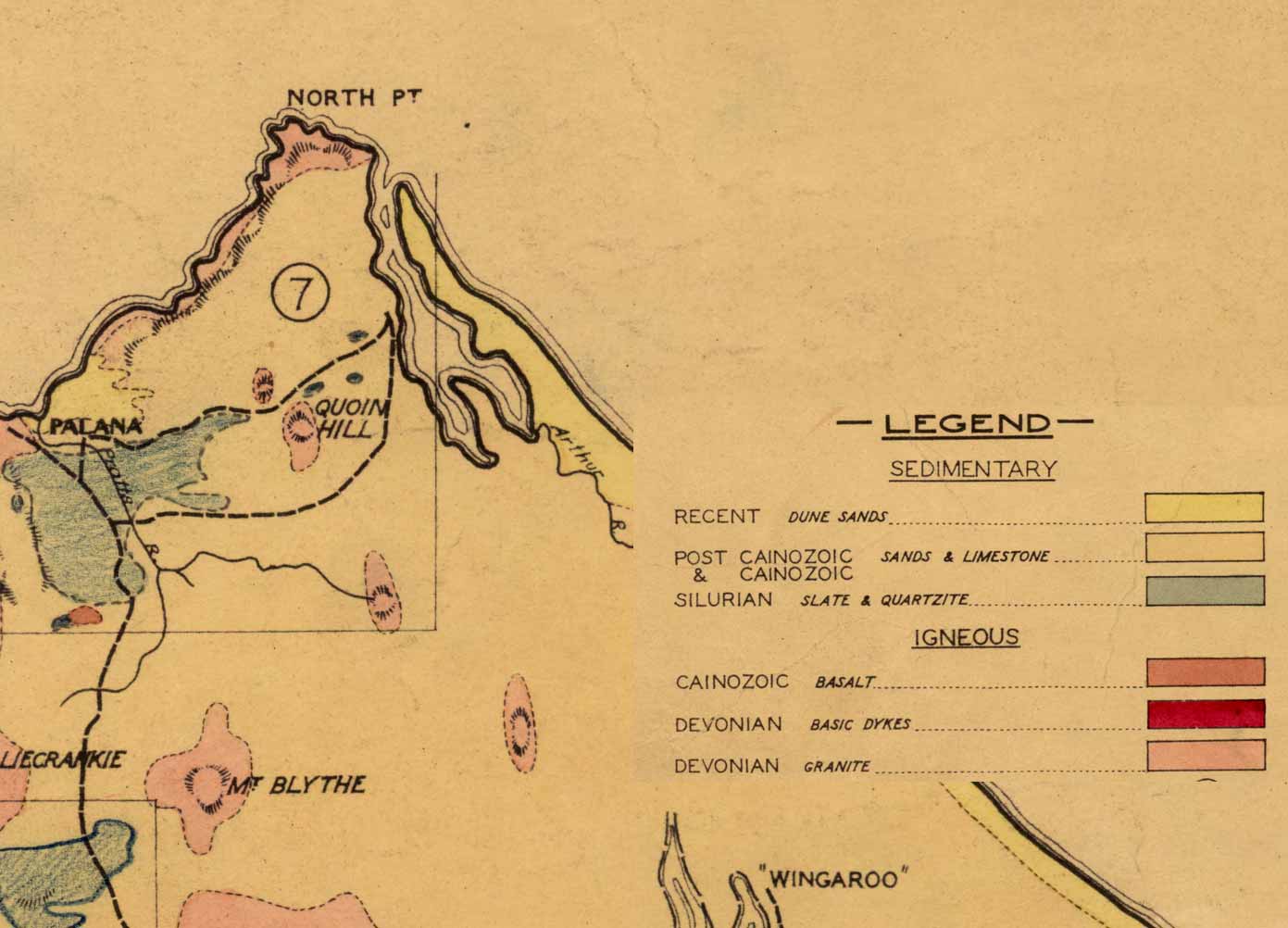 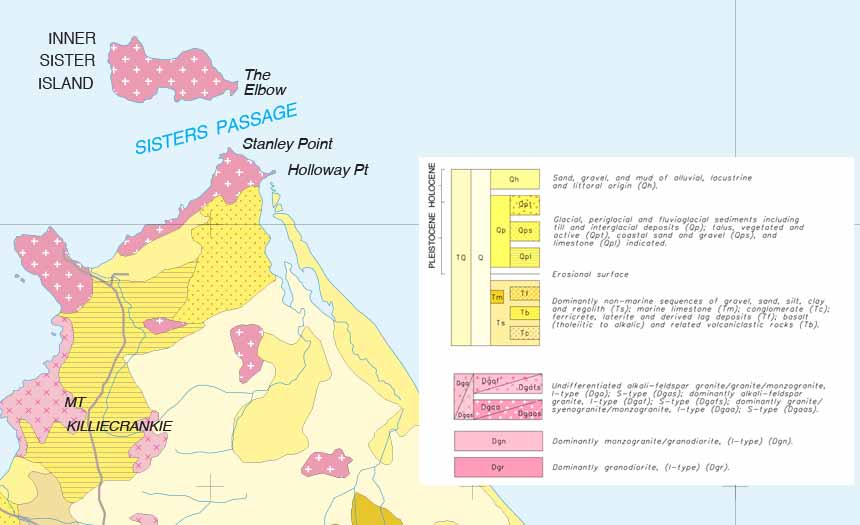