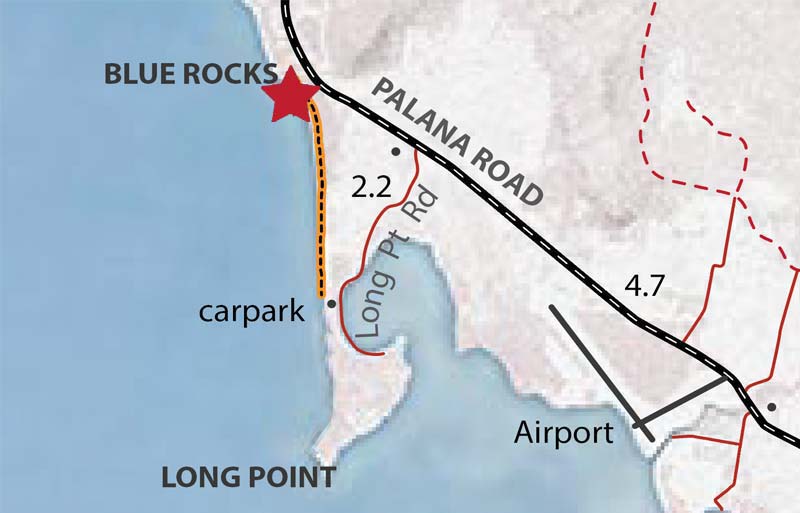 The Blue Rocks Walk is one of two coastal walks which highlight a range of interesting geological features are possible from a car park near the end of Long Point Road, about 400m beyond the Bird Viewing hide. 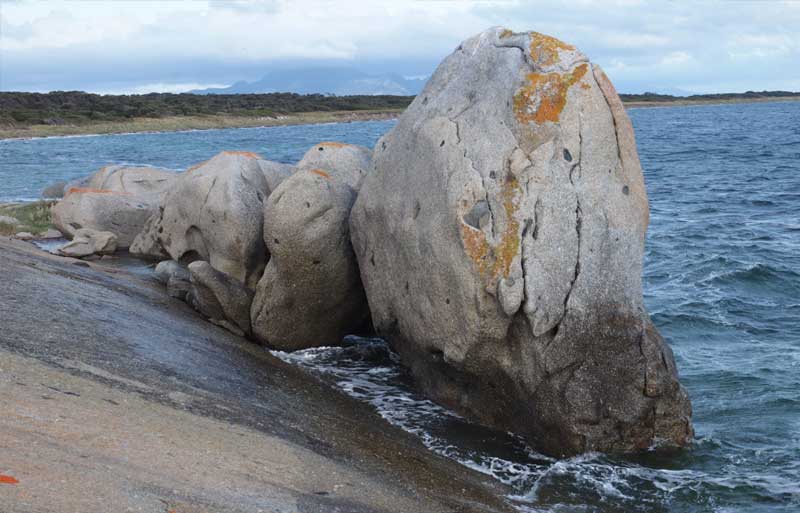 Blue Rocks was named by early navigators because the granodiorite outcrops appeared blue when seen from a distance. When viewed up close however, the rocks appear grey to brown, often with a coating of orange lichen. The large slabs of granodiorite at Blue Rocks started to form about 400 million years ago when a body of molten magma intruded the Mathinna Beds rocks.

As the magma cooled and solidified, a series of very widely spaced vertical cracks or cooling joints developed. Later as the granodiorite rock was exposed at the Earth’s surface by erosion and weathering, flat, sometimes curved secondary joints formed as the granodiorite rock expanded in response to the change in pressure by the removal of the overlying rock sequence.

The flat secondary or sheet joints break the exposed granodiorite surface into a series of flat sheets which can be easily removed by further weathering and erosion. This process is called onion skin weathering or exfoliation. 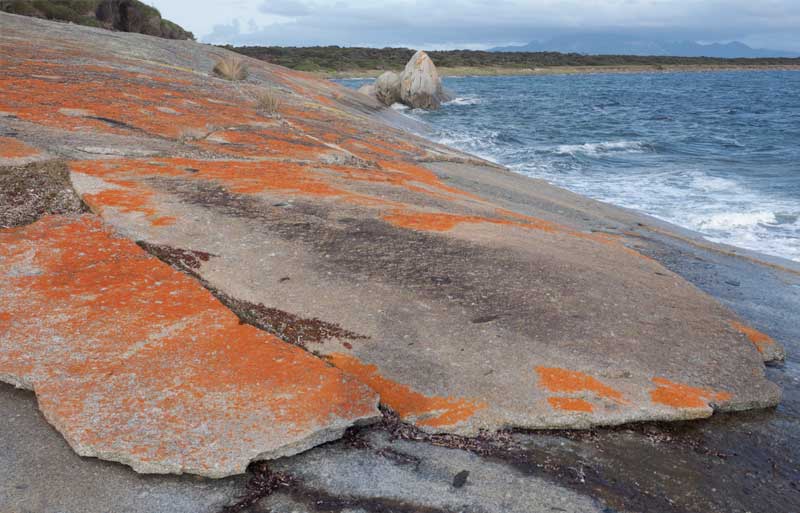 The granodiorite at Blue Rocks contains crystals of quartz, feldspar, biotite and hornblende which are clearly visible on rock surfaces.

This is the same rock type that is exposed and described at Sawyers Bay, Settlement Point, Allports Beach and Castle Rock. See the site descriptions for these sites to learn more about the geological features associated with this granodiorite. 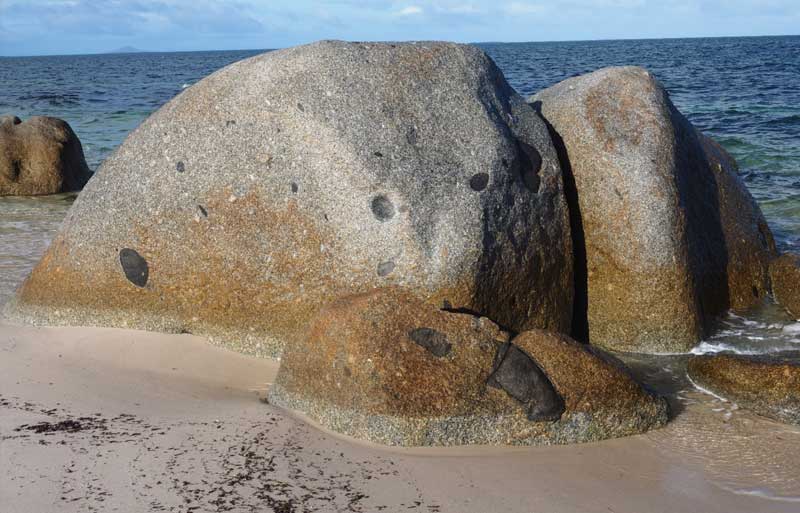 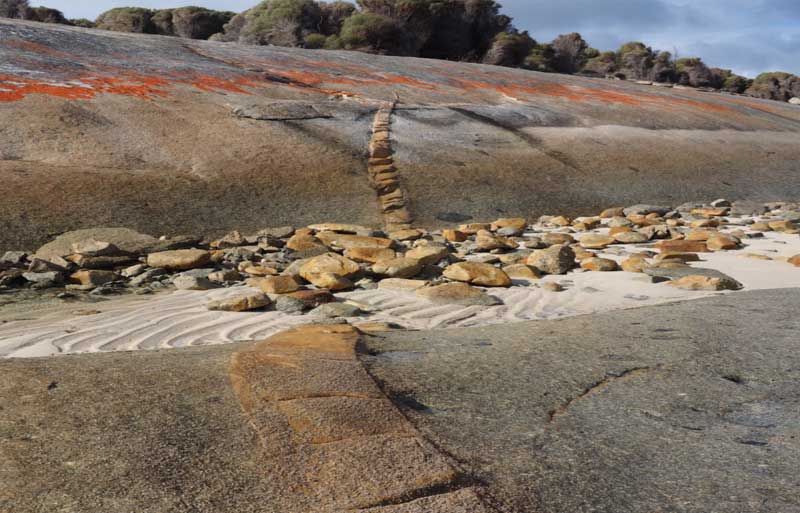 The walk to Blue Rocks crosses one of a few accessible contacts between the Mathinna Beds and the Devonian granodiorite.

This is located on a sandy beach about 250 metres south of the last of the big granodiorite outcrops that form Blue Rocks (best seen at low tide).

In contrast to the granodiorite seen at Blue Rocks, the granodiorite near the contact has been bleached white as fluids released from the magma during crystallization have reacted with the crystals that formed as the magma cooled. At this location, the feldspar, mica and hornblende have been turned into white clay –like minerals.

The Mathinna Beds (shale and sandstone) rocks adjacent to the granodiorite intrusion have been baked, fractured and altered by heat and fluids from the adjacent magma. 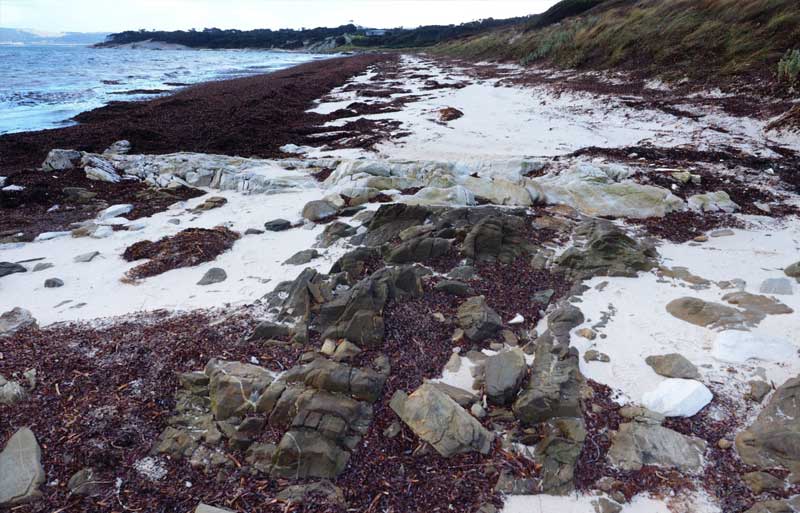 Contact between the granodiorite (white) and Mathinna Beds (dark) near Blue Rocks. If you look closely at this contact you can see evidence of how a molten body of magma intrudes into the host sedimentary rocks, by a process known as stoping. 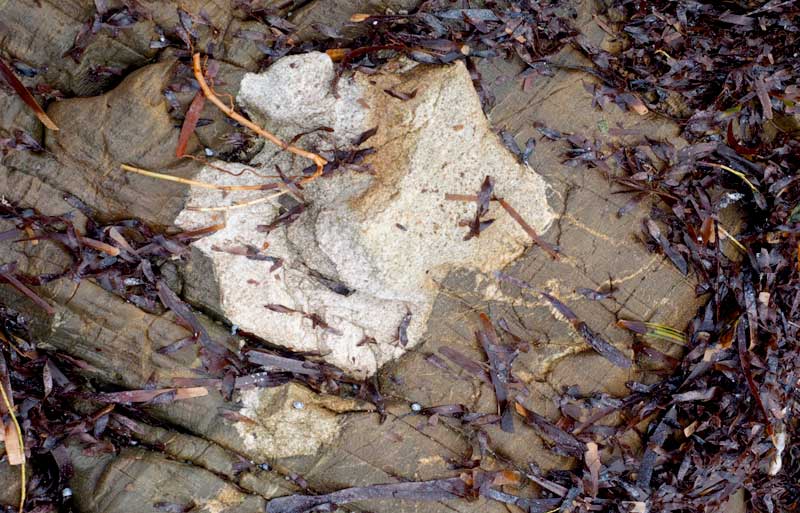 The granodiorite magma is injected along fractures in the host sedimentary rocks. 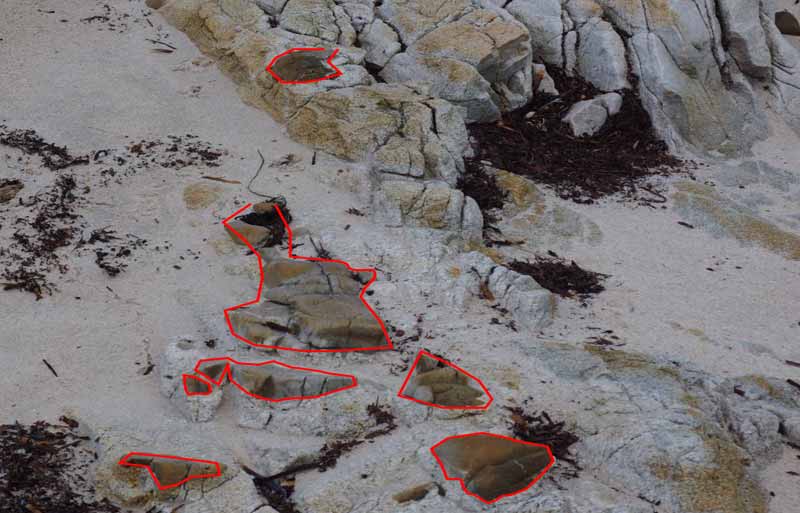 Continued magma injection into the fracture, causes the facture to open and when two or more factures intersect, stoped blocks of the host sedimentary rocks (highlighted in red) can be dislodged and incorporated into the molten magma.