Discover the stories written in the landscape across Flinders Island and its surrounding Bass Strait archipelago along the Furneaux Geotrail.

Use the Geotrail as a companion guide to learn more about the places around you as you visit the island's most popular visitor attractions.

Look out for the Geotrail signage on your travels to help you explore the local geological heritage of Flinders Island.

Save this web-app to the home screen of your mobile device to provide easy one click access to a variety of further landscape information about the island's heritage hotspots.

There are ten geosites located across Flinders Island where you can explore and learn about the stories that define the landscape.

You can access more information about them via the interactive map here. Alternatively snap the QR code link when you encounter a trail node in your travels. 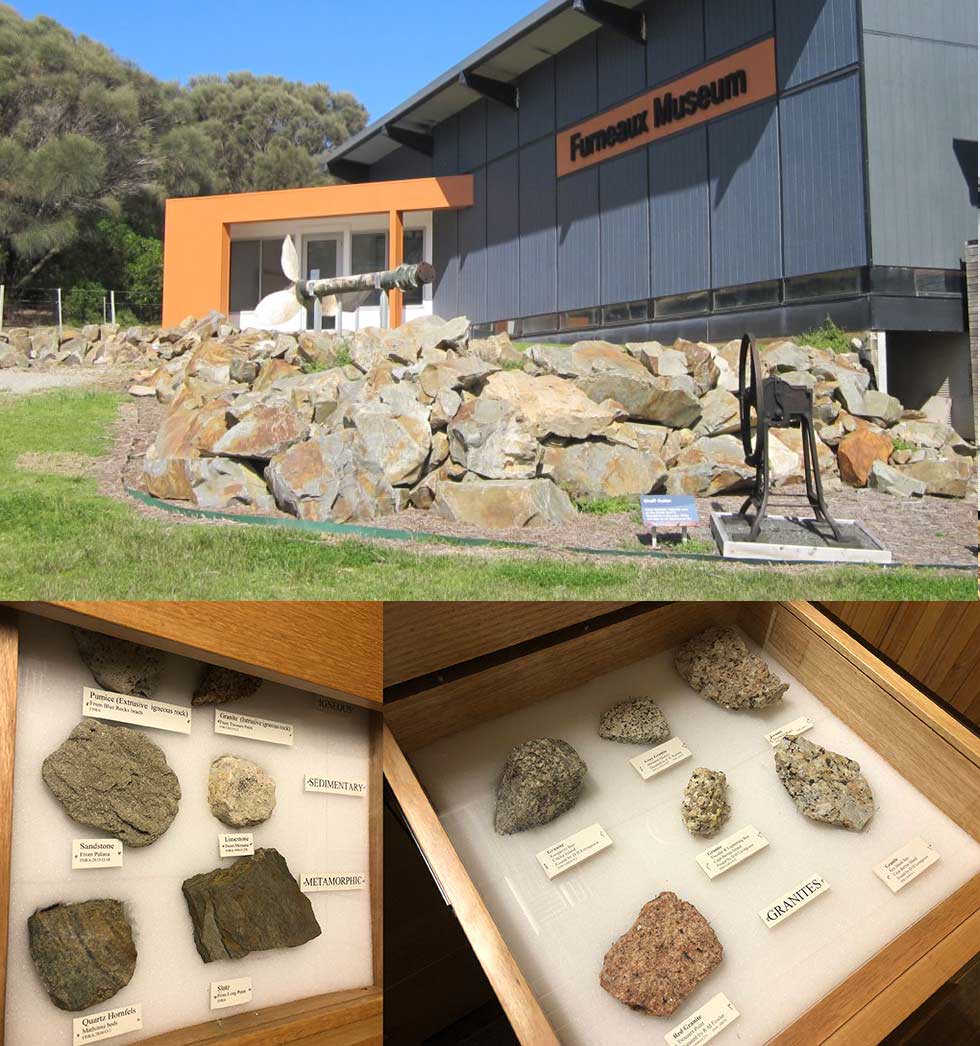 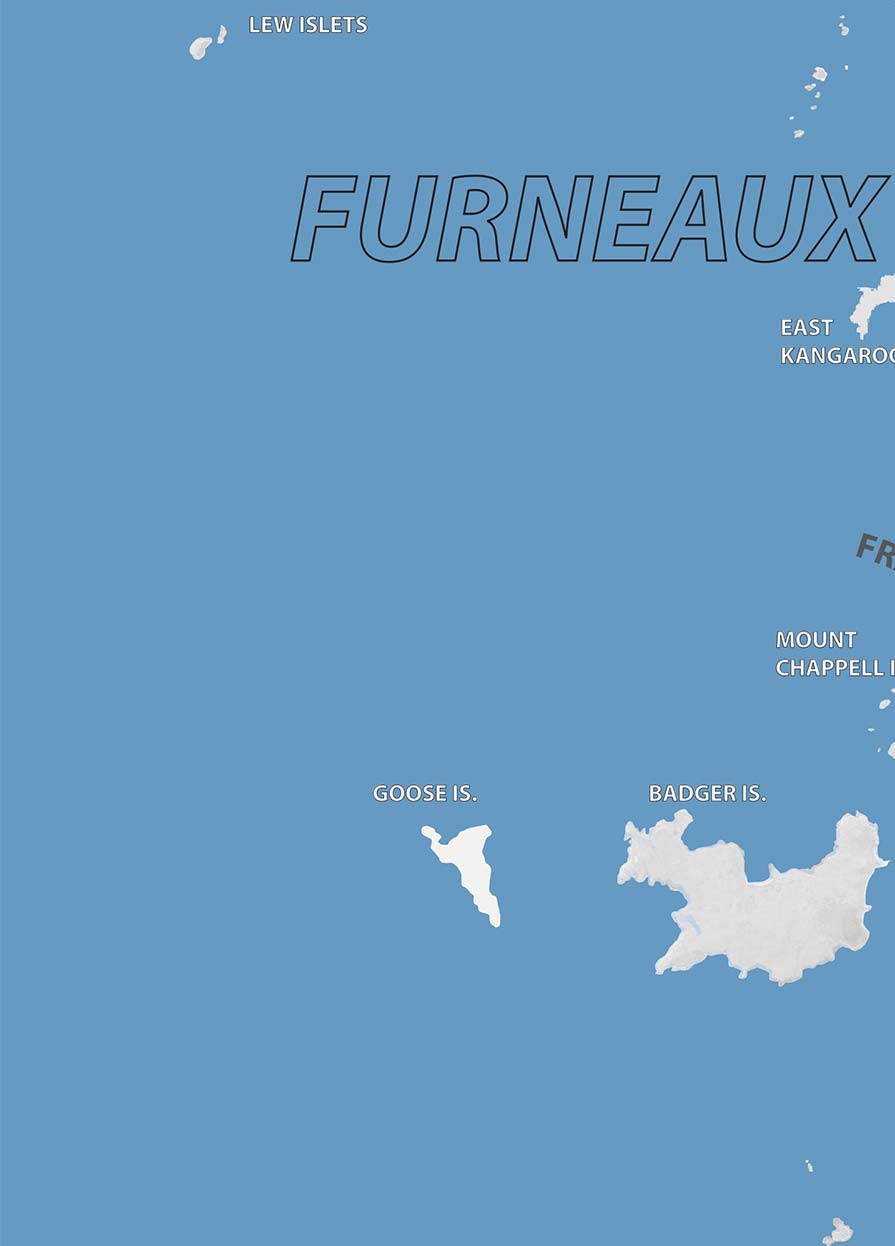 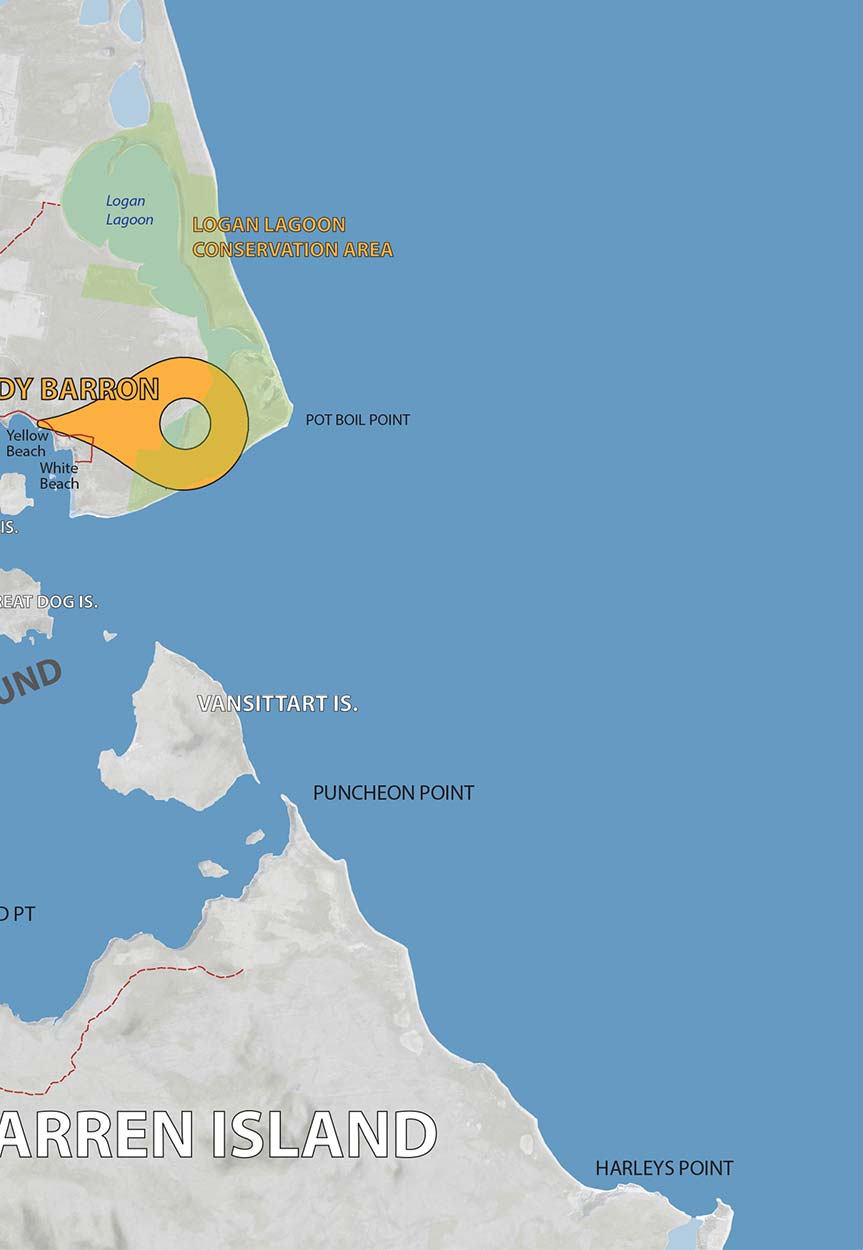 The ideal starting point for the geotrail experience is the Furneaux Museum at Emita. Here you can see all the island rocks presented in the feature geology display.

The museum is also the gateway to the geological and cultural heritage of the Emita and Settlement Point area. Along the way out to the museum, you can take the side trip up to the Walkers Lookout [below] with its panoramic 360˚ views out over the island.

These are some of the common rocks you can find on your journey along the Furneaux Geotrail. 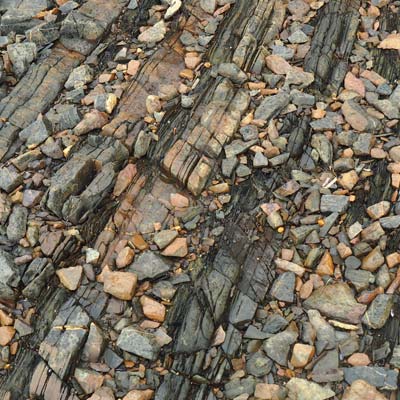 MATHINNA BEDS: The oldest rocks in the Furneaux Group are the Mathinna Beds comprised of slates and quartzite. These rocks were originally laid down as sediments in the deep ocean around 420 million years ago. 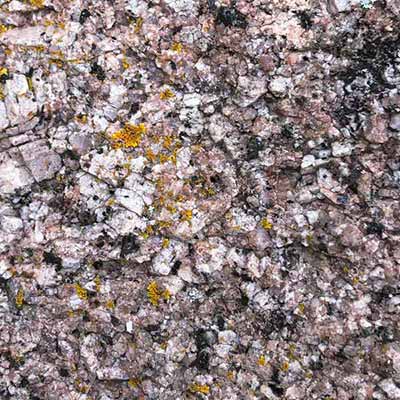 GRANITES: The intrusion of granite magmas around the Mathinna Beds some 380 million years ago led to granitic rocks being the most commonly seen feature of the Furneaux Group today. 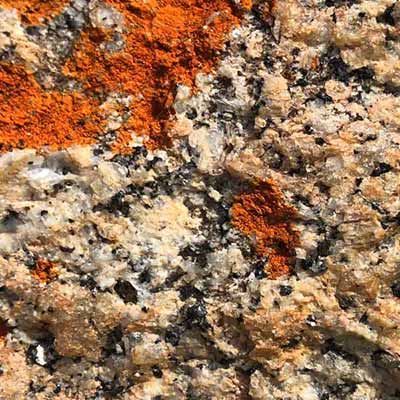 GRANITES: The variety of mineral mixes present in a given outcrop varies widely. This accounts for the many different colours and textures of the granitic rocks we see today. 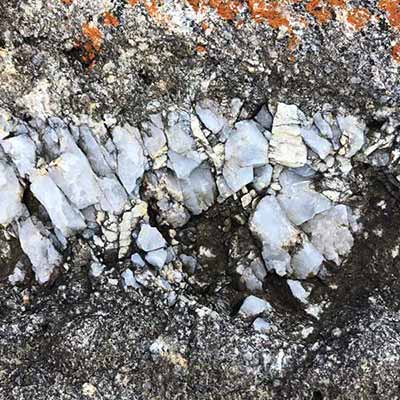 PEGMATITE: The granites also contain patches of very large crustals called pegmatites. These are common in the Killiecrankie area where some may containthe gem mineral topaz. 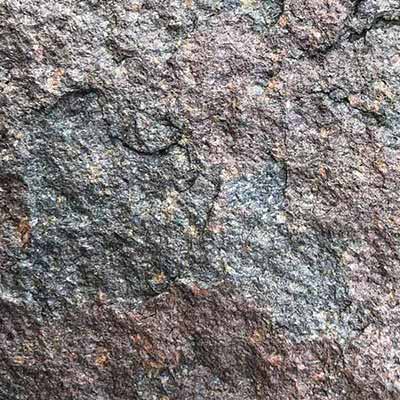 DOLERITE: At some point between the between 380 – 60 million years ago, dolerite intruded into the both the Mathinna Beds and granites of the Furneaux Group. 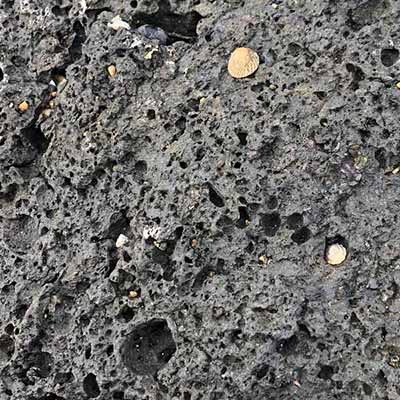 BASALT: We don't appreciate how much basalt there is on Flinders Island today as most of it is covered by more recent sand sediments. Outcrops at Petrifaction Bay offer a rare chance to see them first hand. 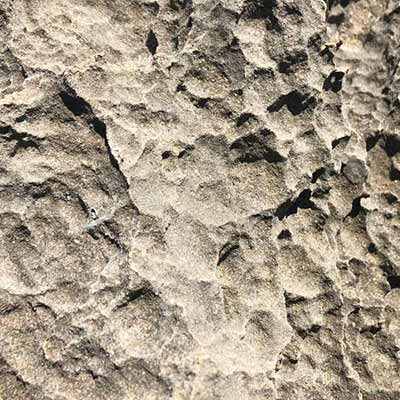 LIMESTONE: Of much more recent origin are the limestones on Flinders Island. They have formed from windblown calacerous sands comprised of the shells of marine forams that lived offshore in shallow waters to the west of Flinders Island.

CALCAREOUS SEDIMENTS: We can see the process of limestone formation in train today in the relatively young (perhaps 2 million years) calcareous rocks outcropping beside the road to Camerons Inlet. 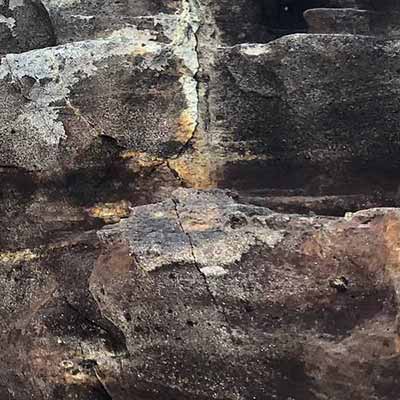 SANDSTONES: Recent deposits of sediments have consolidated into sandstone. Outcrops at Yellow Beach provide a key chance to see this process in action. 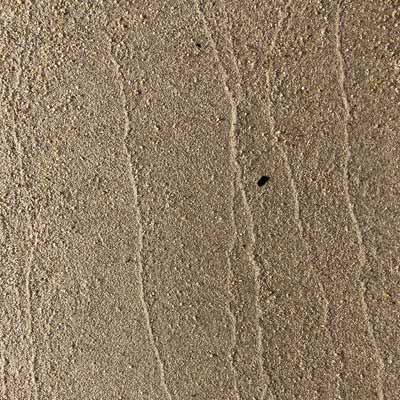 BEACH SAND: We can easily see the geological processes of sedimentary rock formation underway around us today when walking along a beach in the Furneaux Group.

The landscapes we see around us across the Furneaux Group of islands today are built upon layers of rock dating back over
400 million years up to recent times.

The build up of sediments in the Mathinna Beds ended in the Devonian period around 400mya. Deformation along the trailing north eastern continental edge of Gondwana resulted in widespread folding and uplift of rocks. This mountain building event is called the Tabberabberan Orogeny. It lasted for tens of millions of years and affected much of the Australian east coast.

The breakup of Gondwana started around 180mya when Africa and South America broke off the supercontinent. This event coincided with a new array of volcanic activity across Tasmania which saw huge dolerite dykes intrude into existing ancient rock layers. These are mostly seen in the Furneaux Group today in the precinct around Cape Barren and southern Flinders Island.

While ice formed up in glaciers and sea ice across the world, sea levels fluctuated wildly from between 20m-130m below current levels. This had the effect of not only opening and closing a land bridge between Tasmania and the mainland but also of creating a shallow embayment to the east of Flinders Island.

As sea levels rose and fell, sands from the newly exposed marine areas blew up over the island covering up the basalt. Sands from the bay to the west were rich in marine shelled animals called forams. The 'Roaring 40s' winds piled these shells up to create a type of limestone / calcareous sand. To the east the ocean sands tended to accumulate more gently into compacted beds of quartz grains and marine fossils. 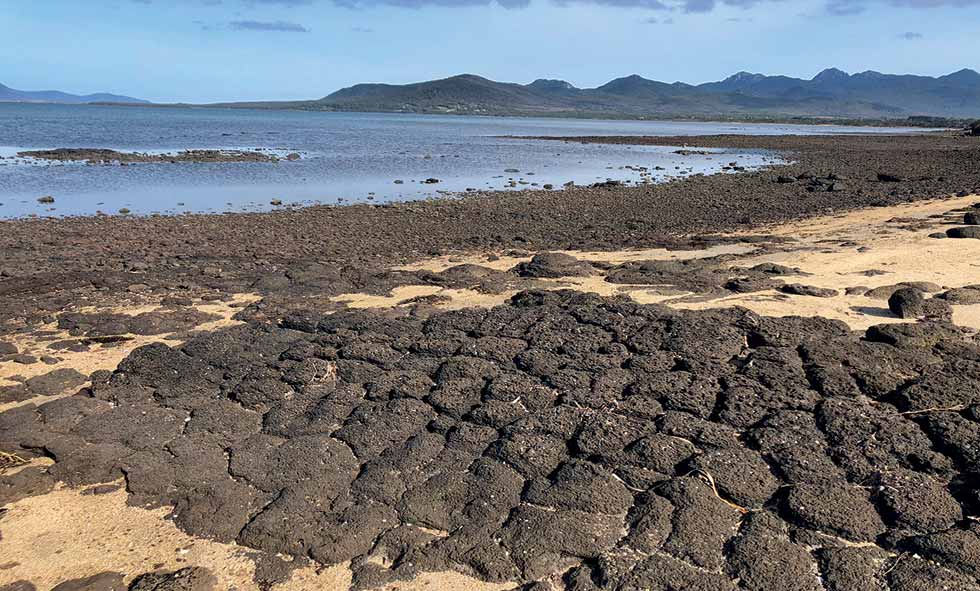 In March 1773, the H.M.S. Adventure under the command of Tobias Furneaux recorded the position of a series of islands in the waters between Cape Howe on the New Holland mainland and Van Dieman's Land to the south.

Having become separated from Capt Cook aboard the H.M.S. Resolution as they journeyed up from the southern ocean, Furneaux charted the east coast of Van Dieman's Land prior to breaking off eastwards to rejoin Cook in New Zealand.

Today Furneaux's charting of the group of islands that bear his name marks the start of 250 years of scientific exploration and discovery across the Furneaux Group.

Our knowledge of the Furneaux Group's geology has been built up steadily over the past 250 years thanks to the work of scientists and map makers.

A key highlight in this was the work Commander Stokes undertook on the HMS Beagle c.1841 to make a detailed chart of the islands of Bass Strait. Accompanying him on this work around the Furneaux Group was the famous Polish scientist Count Strzelecki.

Strzelecki's initial geological observations were expanded on from the 1870s onwards with several landmark reports and geological maps being produced in the 1940s.

Today the detailed geological map of the Furneaux Group provides a snapshot embracing generations of ongoing scientific research into the islands' geological heritage.

Read detailed accounts from the 250 years of research and discovery across the Furneaux Group of islands ... 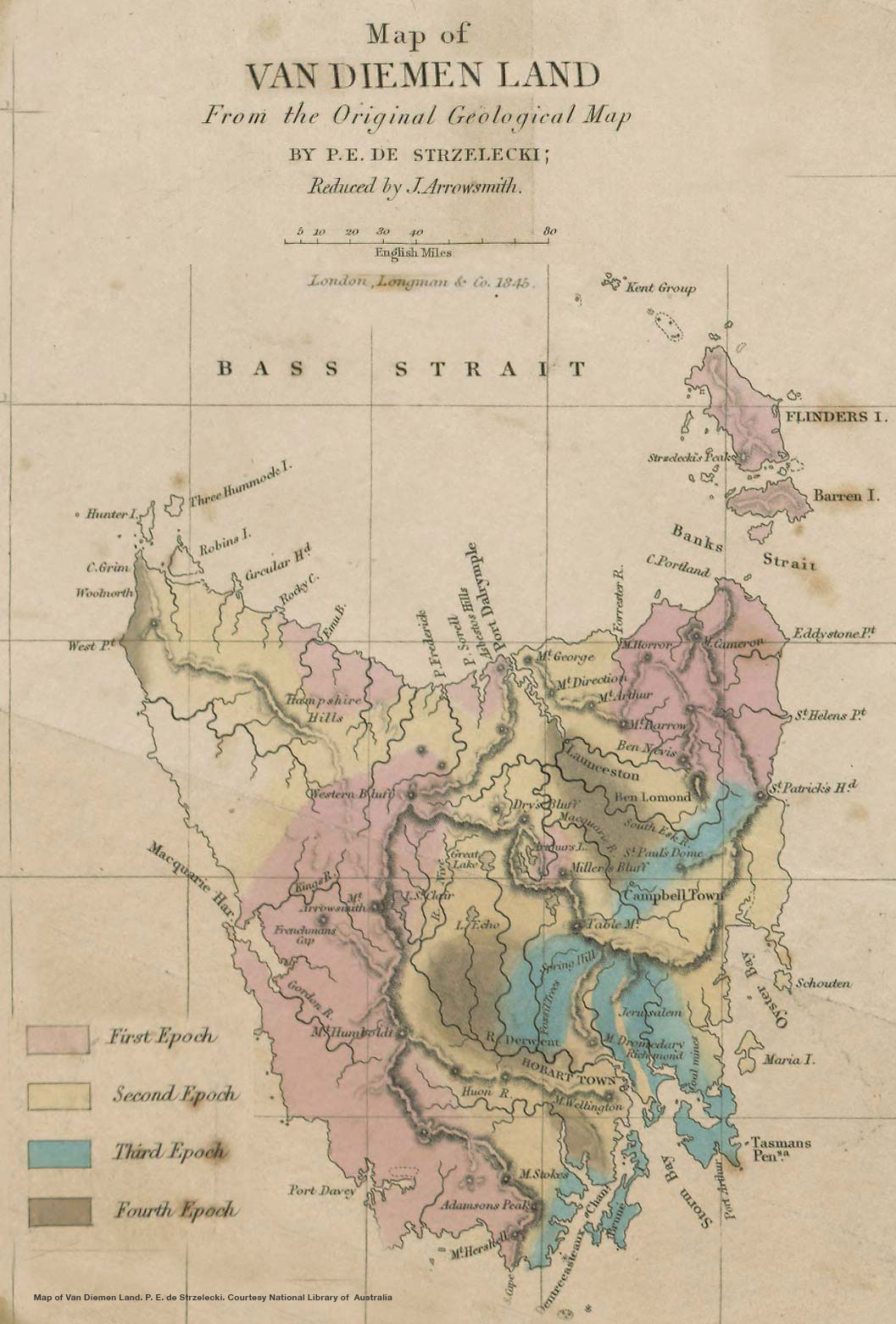 Paweł Edmund de Strzelecki was a Polish explorer and scientist whose travels left an indelible mark on the history of both Tasmanian geology and Flinders Island.

In 1845 his geological map of New South Wales, Victoria and Tasmania was published along with an account of the physical descriptions of these places. In his book, Strzelecki noted that ...

"On the 13th January, 1842, I ascended, from the westward, the highest peak of Flinders Island, which Captain Stokes, of H.M. surveying ship the "Beagle" has done me the honour of naming Strzelecki's Peak (2550 feet)." 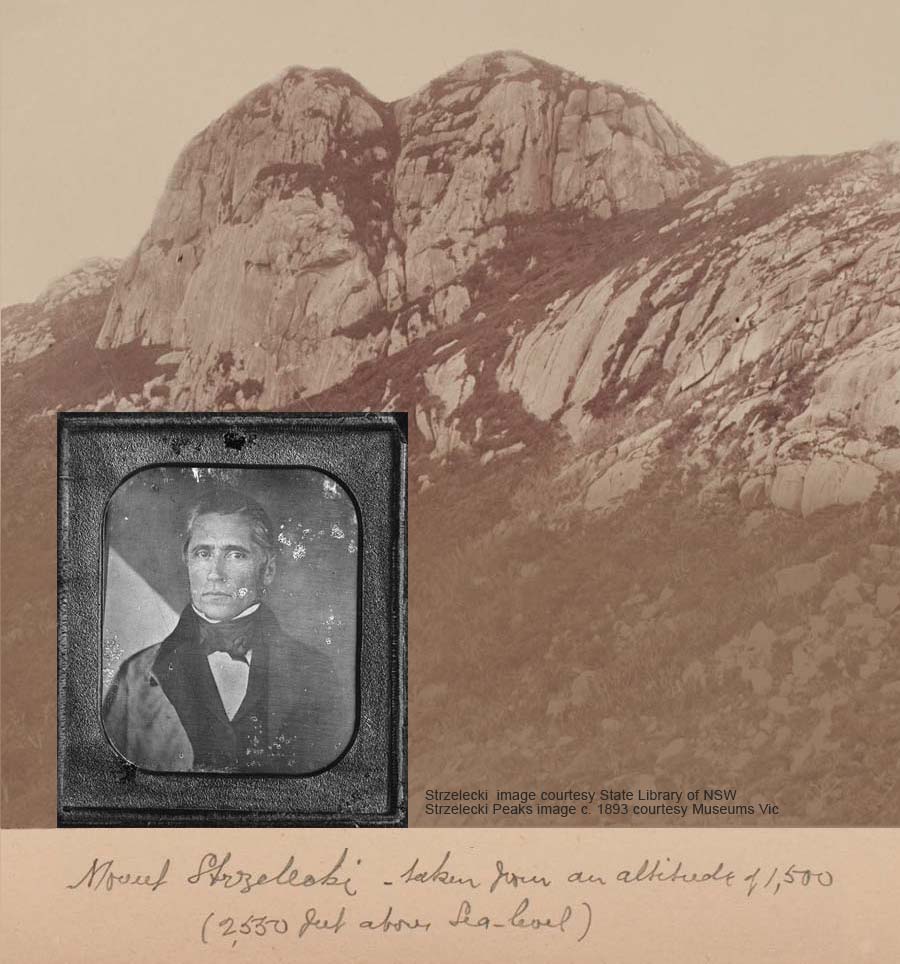 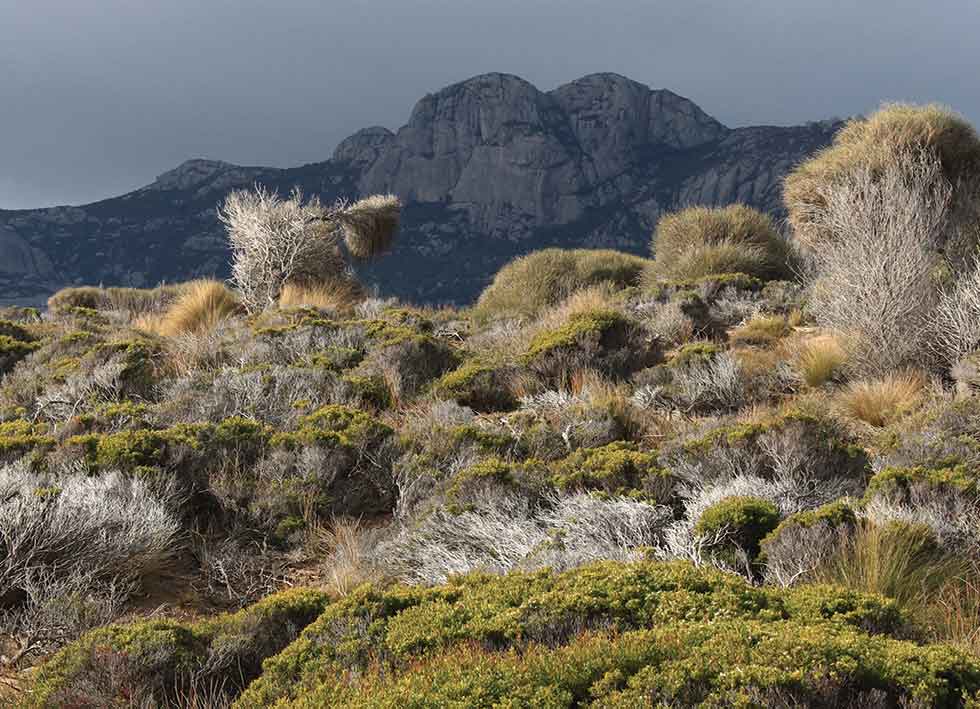 The Furneaux Geotrail is an initiative of the Flinders Island community proudly supported by the Tasmanian Government.

To discover the full range of things to do on this remarkable Bass Strait island go to the visitflindersisland.com.au website.