Trousers Point is one of the island's iconic granite locations with the rich colours and textures of these rock outcrops dominating the landscape here.

With the high ranges of Strzelecki National Park rising above it, Trousers Point feels like a natural base camp on the island from where you can explore the rich geological heritage that surrounds you.

It used to be said that only a geologist could really understand granite – but that’s no longer true!

At Trousers Point you also have the chance to look more closely at these intriguing rocks. They reveal the dramas which unfolded here from around 380 million years ago deep within the earth, with mountain building episodes, melting rocks and later erosion. Enjoy the simple pleasure of exploring the granite textures and details now finally exposed to the sunlight. 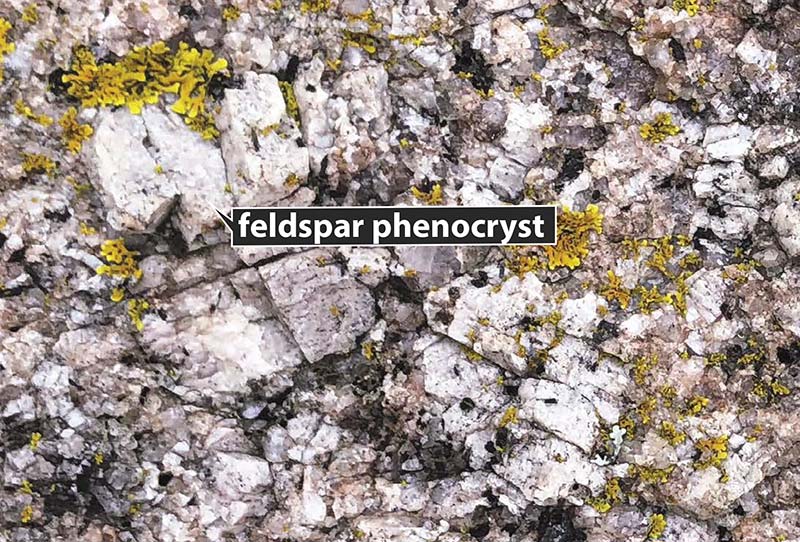 Phenocrysts are large crystals that are amongst the first things to form as the magma slowly cools deep within the earth.

They stand out from the surrounding finer grained rock. Geologists use their presence or absence as a key diagnostic tool to classify igneous rocks.

Looking at the granites at Trousers Point you can see quite big feldspar crystals.

Feldspar is a common mineral that makes over up 40% of the earth’s crust. It is used in making glass and ceramics.

There are around ten different types of granite found on Flinders Island.

One of the quickest ways to spot the differences between them is by colour.

Colour is a simple code to the mineral composition of the rock.

Mica is the first mineral to crystallise in the magma.

As well as standing apart as black crystals in the rock you may spot mica grains even within the feldspar crystals. Looking at the granites at Trousers Point you can see quite big crystals. You can also pick out the feldspars, the quartz and various other minerals in the rock. At a larger scale there is also erosion occurring where the rock breaks down into the crystals that eventually make the sand on the beach. This means that at locations like Trousers Point it's not just about rocks, but also about processes – the geological process making the beaches.

Scientists have identified between seven to twelve different types of granite on Flinders Island with these ranging most obviously in colour and crystal size and texture.

The pinker rocks occur as a result of a lot of quartz. Others are greyer with a lot of feldspar in them while some have a lot of black minerals like miotites. Down on the beach you walk over the granites - an igneous rock that has some quartz in it, some feldsar and typically a mica phase.

Here we can see quite clearly the pink colours - that’s the quartz, the white crystals are the feldspars and mica is there in the black flaky minerals. So that’s main constituents of the granite. These feldspars are quite exceptional really. Within the feldspar you get little inclusions of mica as well which is quite interesting. As the feldspar grew it would have captured the mica that was already crystallised in the melt. 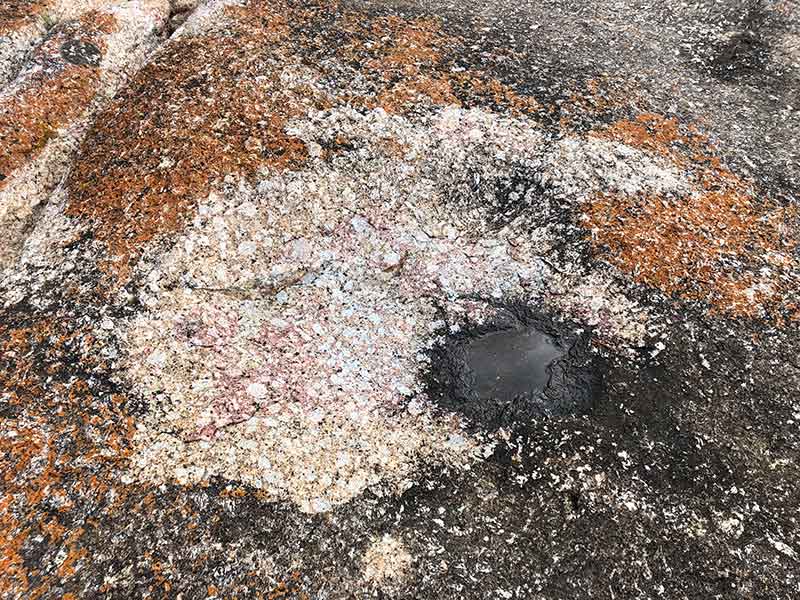 In places you can see large elipsoids with white halos around them. These are called inclusions within the granite.

These inclusions are older than the granite that surrounds them. When the newer granite was intruding in through the crust it’s broken up blocks of the pre-existing granite and included them in the new rock mix. Some of these inclusions can be up to 2-3 metres big here along the coast. 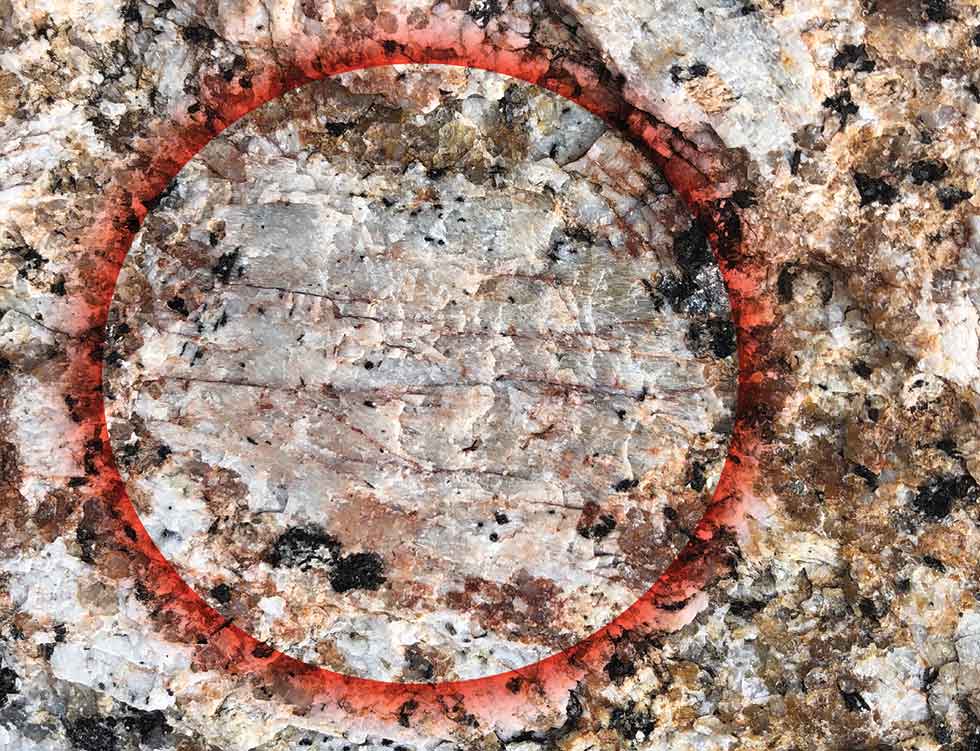 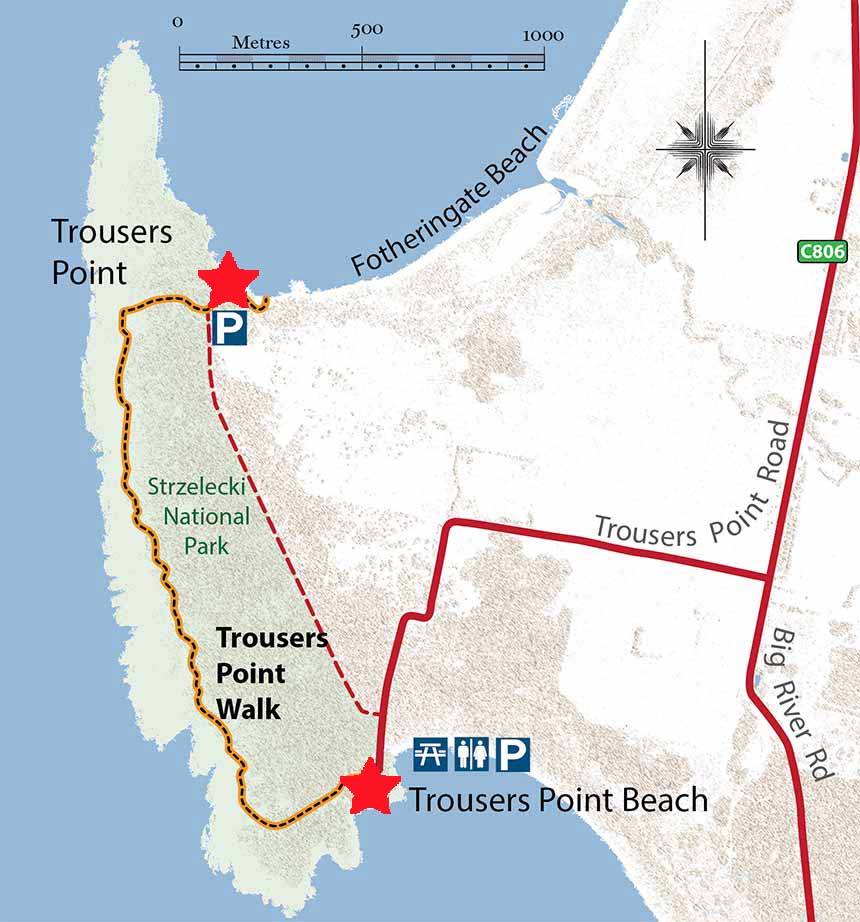 The granite outcrops that are exposed in the Trousers Point to Fotheringate Bay area are part of a large granite pluton called the Strzelecki Granite.

This granite body intruded into the Mathinna Beds as a hot magma about 380 million years ago when tectonic activity along the eastern Australian continental margin melted the lower continental crust.

The granite is composed mainly of feldspar, quartz and mica (mainly biotite), although in places it may also contain some garnet. A feature of the granite is the relatively abundant large crystals (or phenocrysts) of feldspar in a finer groundmass of feldspar, quartz and mica. Geologists call this a porphyritic texture.

Along the coastal exposures in this area, the amount of phenocryts can vary considerably and in places they are absent and the granite has an equigranular texture. In places, you may see late stage dykes of microgranite and pegmatite cross cutting the granite. 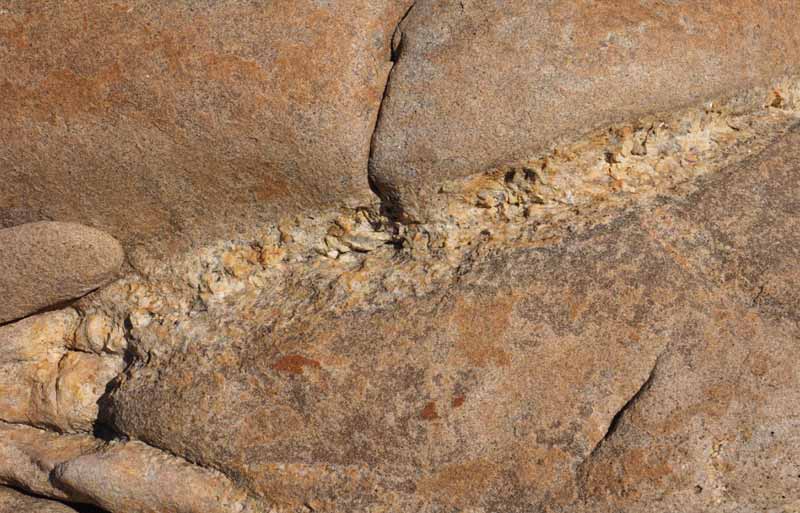 During this process, large blocks of the earlier granite where dislodged as the later granite intruded along fractures in the equigranular granite and are now preserved as isolated blocks floating in the later porphyritic granite.

Geologists call this process stoping. At Holtz Point about 1.5 kilometres south east of Trouser Point, the later porphyritic granite has intruded into the Mathinna Beds and there are large blocks of baked metasedimentary rock, up to 10 metres across 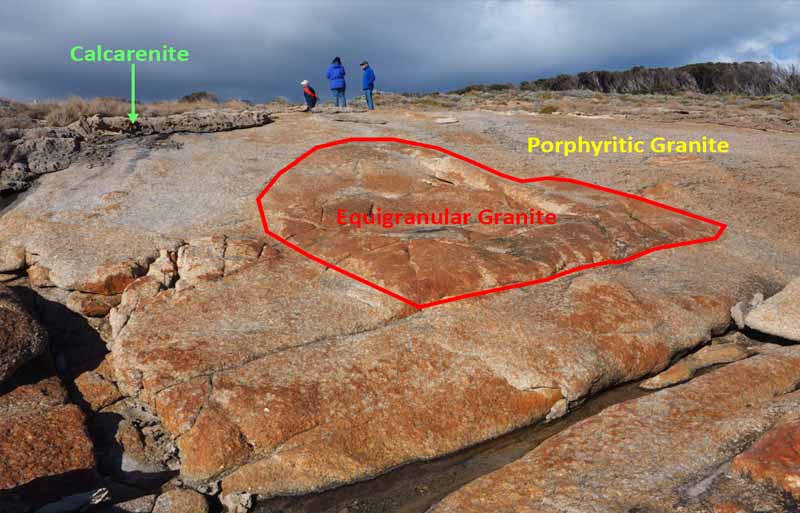 As you follow the track along the coastal granite exposures, you’ll notice rock holes, containing water. These indentations are the product of weathering caused by water. 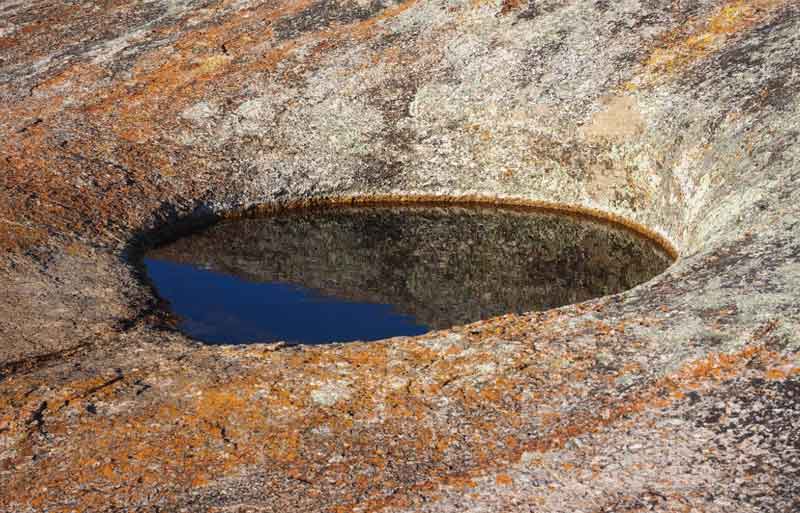 They are called Gnammas, a word with an Aboriginal origin used to describe a rock hole, usually in granite, and often containing water.

Also keep an eye out on the large dome like granite outcrops and you may see evidence of exfoliation of the granite. 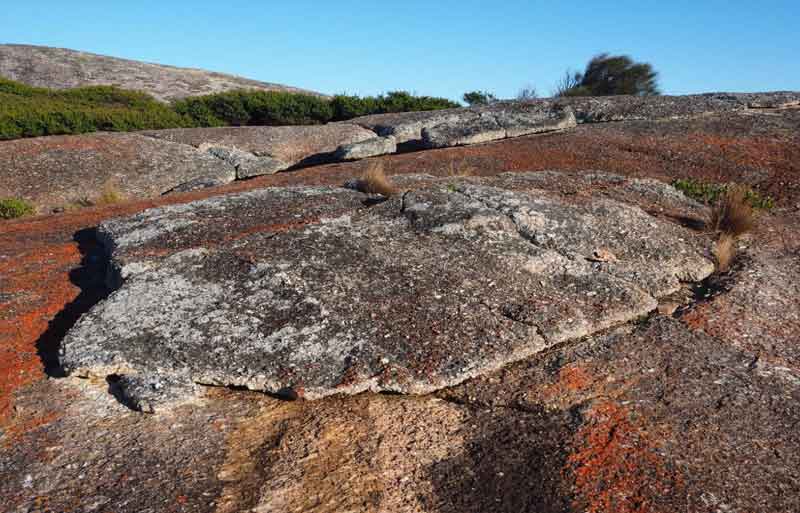 Above: A sea stack developed in calcarenite at Fotheringate Bay. Notice the irregular upper surface of the stack reflecting the development of karst due to acidic erosion by sea spay. The distinct wave cut notch and shore platform has developed in response to the establishment of current sea level in the last 10,000 years. 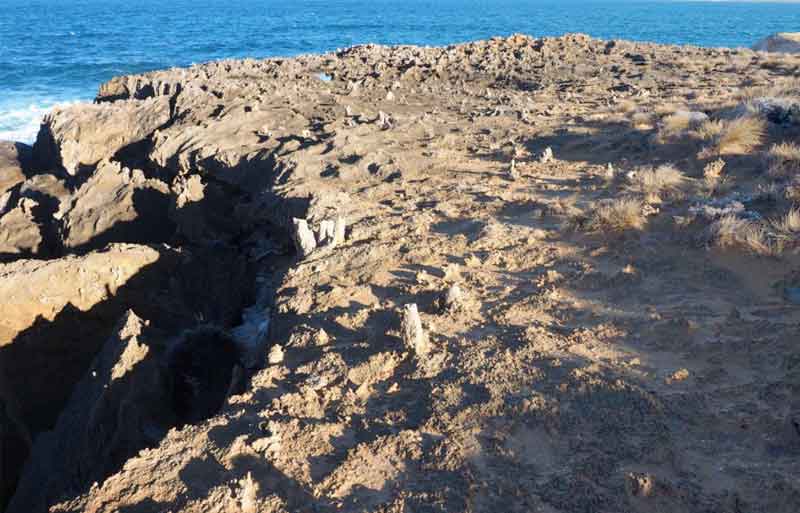 Along the Trousers Point to Fotheringate Bay coastal walk, the well-rounded lichen-covered granite boulders so often exposed on Flinders Island are contrasted with the intricately weathered and sometimes jagged appearance of a type of Limestone called calcarenite.

Calcarenite is a product of the fluctuations in sea level in this area during the last Ice Age. When sea levels were relatively high (in an interglacial period), the shells of tiny sea animals called Foraminifera were deposited on the sea floor. Over time as the Earth cooled and the polar ice caps froze, the waters retreated, leaving the shells and sand above the shoreline.

As the sea level rose again the shells and sand were blown inland and formed sand dunes along much of the west and north coasts of Flinders Island. This process stopped between about 12,000 to 10,000 years ago, when the sea level rose approximately 60m to the current level. Much of the low lying areas of Bass Strait were flooded and Tasmania became isolated from the mainland.

Later water percolating down though these deposits caused the lime from the shell fragments to dissolve. Deeper down the dissolved lime crystallised, cementing the sand grains and fossil fragments together to form a type of limestone called calcarenite.

These events have been repeated a number of times over hundreds and thousands of years and is still happening today. A combination of processes has re-dissolved the lime eroding the rock away to form beautiful sea sculptures exposed along the walk and at the nearby Fotheringate Bay. Wave action, carbonic acid formed from sea spray and rainwater, and the action of the rasping tongues of shellfish feeding on the algae of the intertidal regions, have all played an important role in shaping the formations we see today. Above: The calcarenite outcrops as a thin veneer overlying the granite. The contact between the granite and younger calcarenite is highly irregular and it is evident that the granite had undergone a high degree of erosion and tor development prior to the deposition of the calcarenite dunes. Above: Honeycomb weathering is commonly developed in the spray zone on the calcarenite cliffs at Fotheringate Bay and is primarily the result of the cyclic wetting and drying of the salt water rich sea spray and the mechanical disintegration of the rock as small salt crystals grow and expand. Above: The calcarenite cliffs at Fotheringate Bay display a variety of geological features. Note the thin veneer of iron rich calcrete that has developed on the upper surface of the calcarenite outcrops. This is a zone of secondary carbonate that has recrystallised over a long period of time. It commonly has a breccia texture with clasts of calcarenite and some fragments of previously formed calcrete.