Some of the most recently formed rocks on the island are there for you to explore at Yellow Beaches overlooking the sheltered channel waters of Franklin Sound.

Sandstones rich in dark organic matter outcrop at the rear of the beach and the sand is stained with the residue of recent erosion of this rock feature. 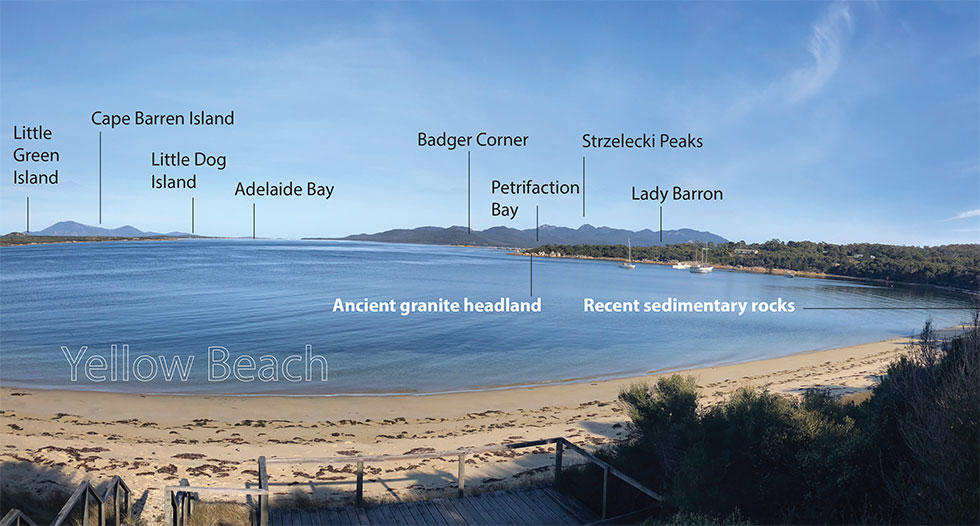 Sedimentary rocks form mostly on the sea floor. Exposed sedimentary rocks along the western section of Yellow Beaches give us an insight into what life would have been like here just 2 million years ago.

Sea levels were much higher and this area was underwater. Walking along the beach towards Lady Barron you can see some of the new sedimentary rocks, formed from sands deposited in a shallow marine environment.

Walking along the beach towards Lady Barron you can clearly see the layers which formed when the sedimentary rock was deposited between 10,000 and 100,000 years ago.

As the sea levels dropped, increased rainfall eroded the newly exposed land surface forming sand which was then washed into the shallow sea.

At the southern end of Yellow Beaches there is a headland where granite outcrops.

This granite formed as a body of molten rock that intruded deep within the crust about 380 million years ago. 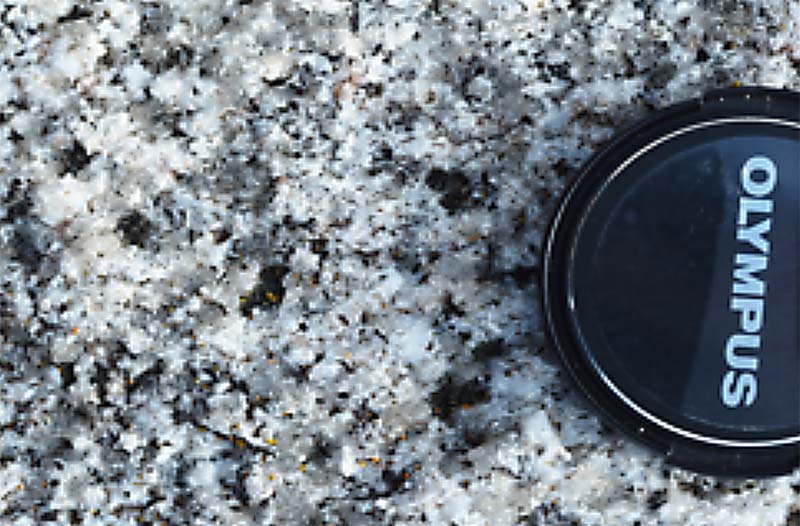 It is composed mainly of quartz (grey to colourless), feldspars (pink and white) and black biotite mica crystals which formed when the magma cooled . 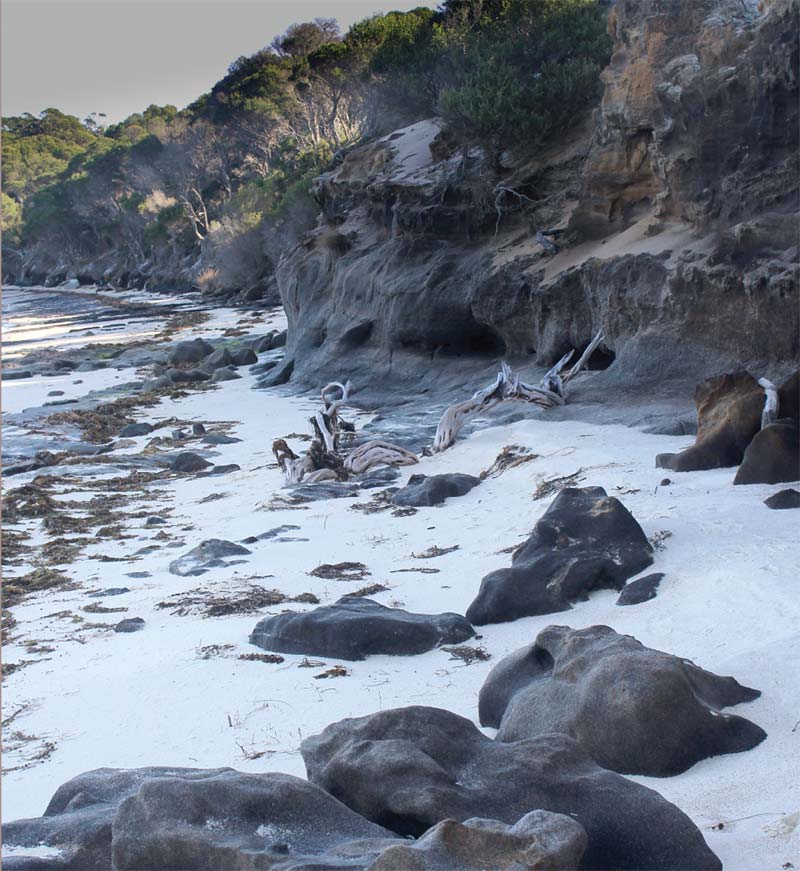 Things to look out for

Walking along the beach to the west it's a lovely sheltered bay and because it is sheltered some of the older Pleistocene rock types have been preserved. Pleistocene is roughly 2m to 12,000 years ago.

The sedimentary rocks here are not like the calcareous sandstones we find elsewhere. 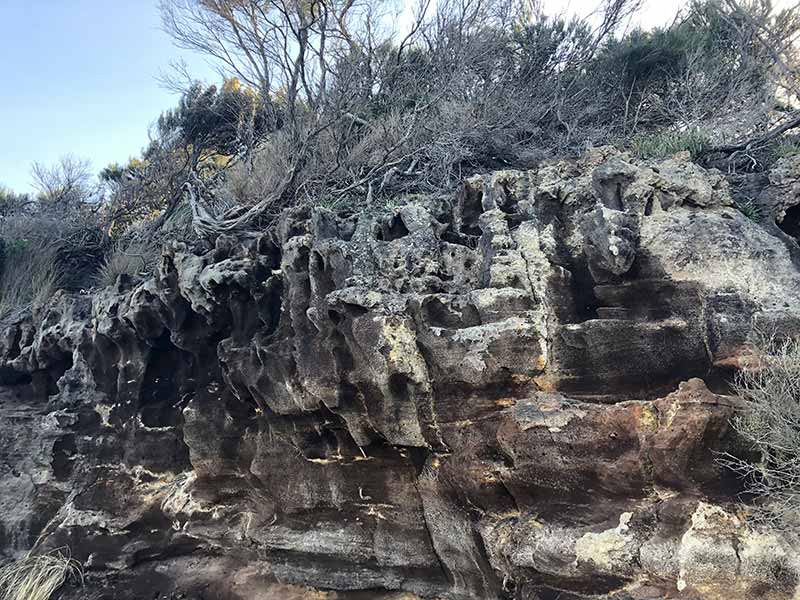 These rocks are very peaty in places, containing a high content of organic matter. In the past there were reports of methane smells emanating from rocks similar to these elsewhere on the island. The local landowners might have had hopes of finding oil somewhere below! 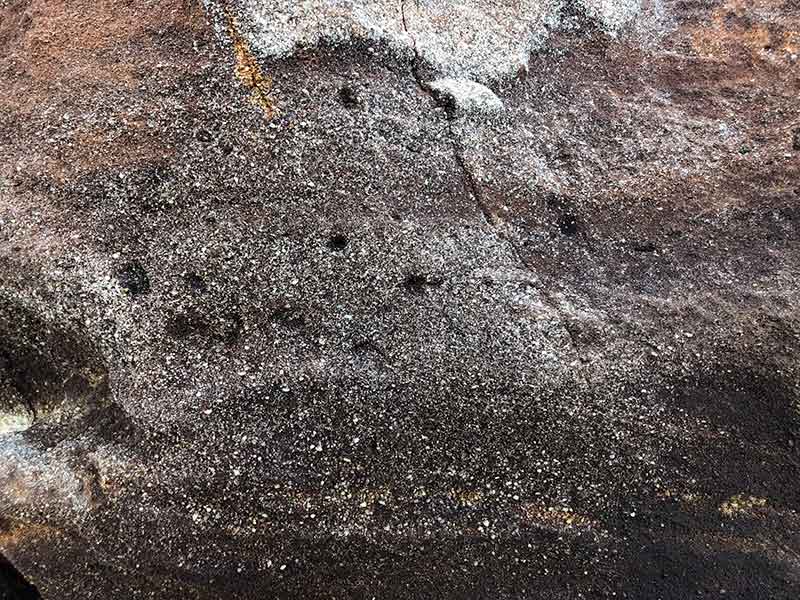 Looking at the peaty sedimentary rock and you can clearly see the bedding and some of the sedimentary structure in the rock.

The rocks here are partly marine deposition. As the sea level has retreated you’ve developed lagoon shallow marine environments – a bit like those lagoons you go past after Camerons Lagoon. It’s that in between place and that’s why it looks like it got soil as well as just the pebbles. It’s a mixed environment - there’s a lot of organic matter mixed in. If you did pollen studies you’d probably find plant stuff mixed in there. Again – it’s not that old – you can see how friable it is. It easily erodes under the action of wind and water.

So while the Mathinna beds were deposited in deep water probably 1km offshore this is shallow water deposits probably no more than 5m deep at the most – very near shore.

This rock is in water with a bit of wave action and you can see the dune forms that kind of tell you there were waves.

And you can see how all the erosion is still going on - basically it’s creating more sand - you can see how the rocks have fallen down because they have been undercut so it’s an ongoing process. 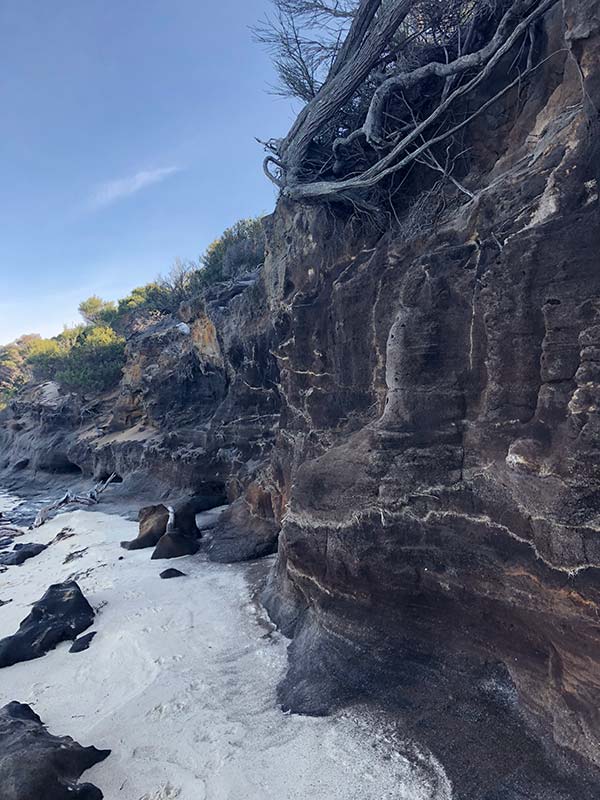 So if you’re talking about erosion on a seashore and how it happens this is a great example.

Also on this beach you can see a fine black mud which is really interesting - that’s like peat - you wouldn’t call this peat - it’s just sandstone which does however have a high organic content as well.

With sandstones we usually think of nice consistent clear crystals like the Hawkesbury sandstone – this is different. You can see it – it looks so dark. Its got a fair bit of grit in it. 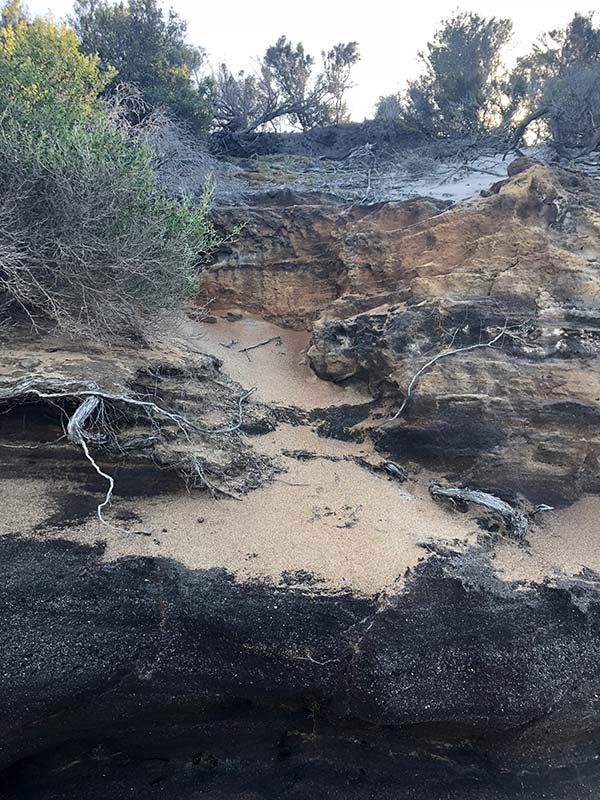 There’s a good profile through here. Right at the top you’ve got recent soil layer – the dark stuff. Then below that you’ve got the white sands – these are the recent wind blown sands.

Then below that you’ve got the gritty layer - but if you look at the top 2-3 feet of the gritty layer its yellow in colour and that’s due to the superficial weathering - we call this a soil profile.

The geological maps of this area produced since the 1870s show us where the Yellow Beaches rocks sit in relation to the other areas around them ... 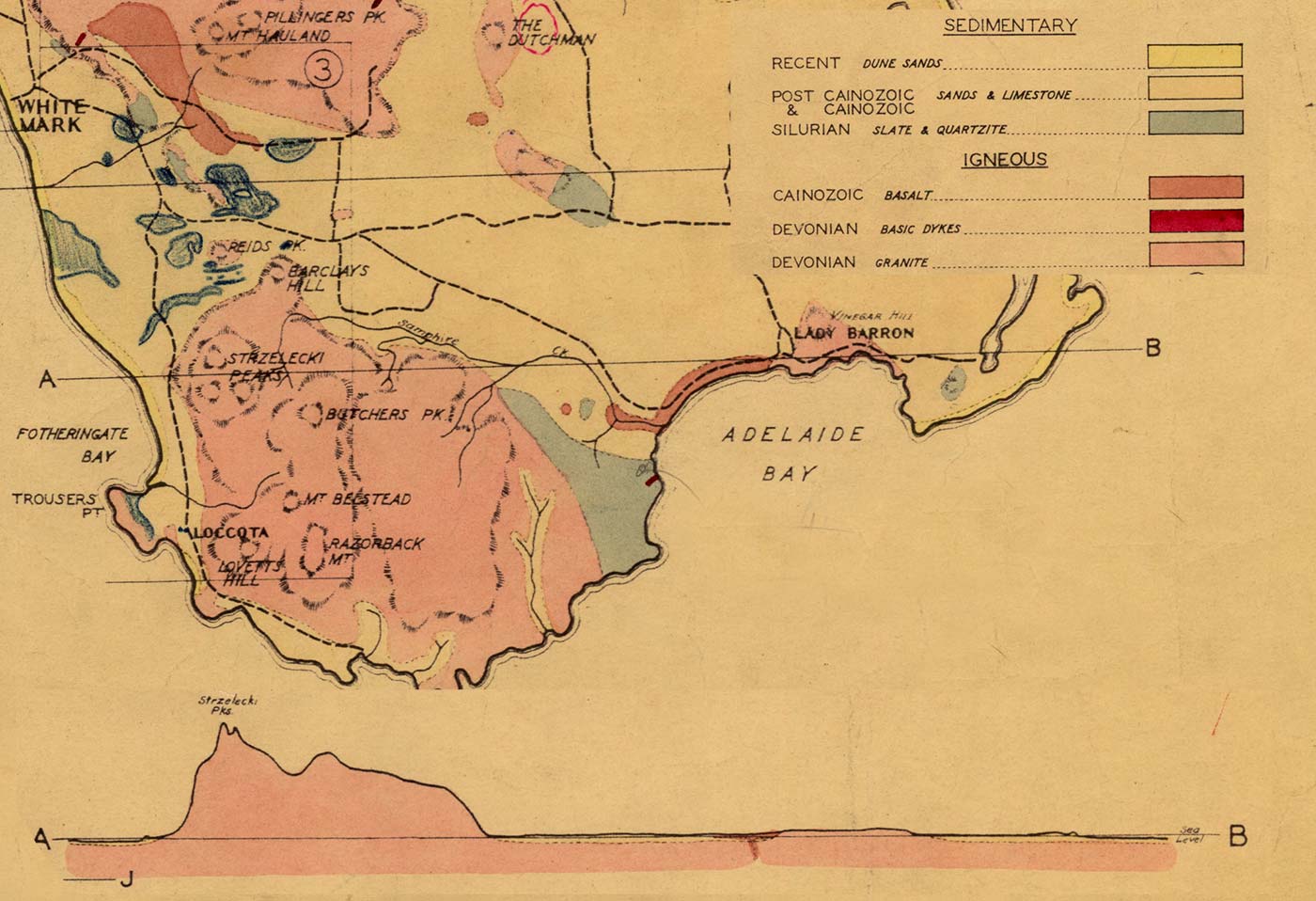 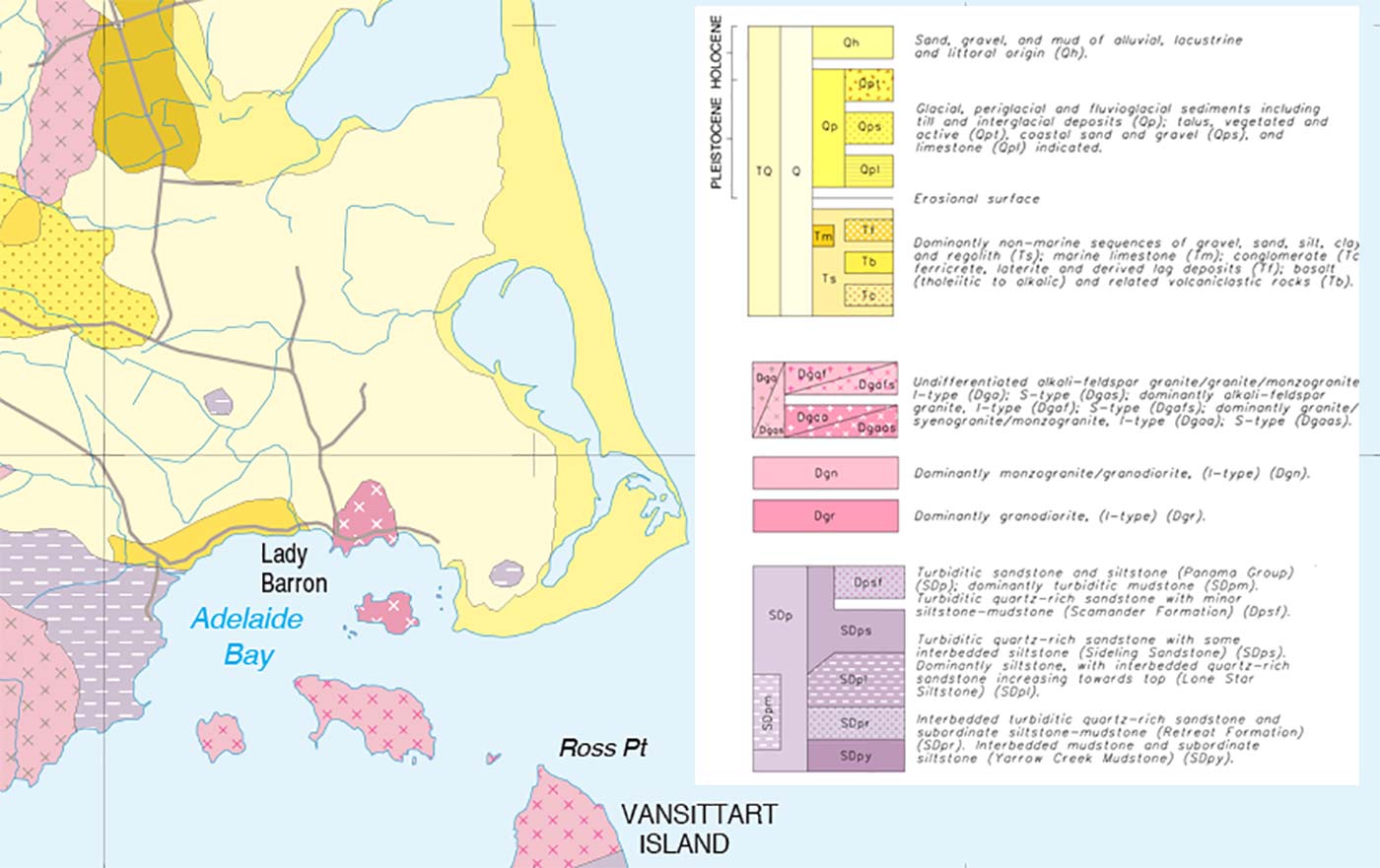