The Dock is a relatively sheltered bay on the northern side of Mt Killiecrankie. It can be accessed via a 4 wheel drive track that turns left off the Palana Road about 6 kilometres north of the Killiecrankie turn off (look for the bouys to find the correct turnoff). 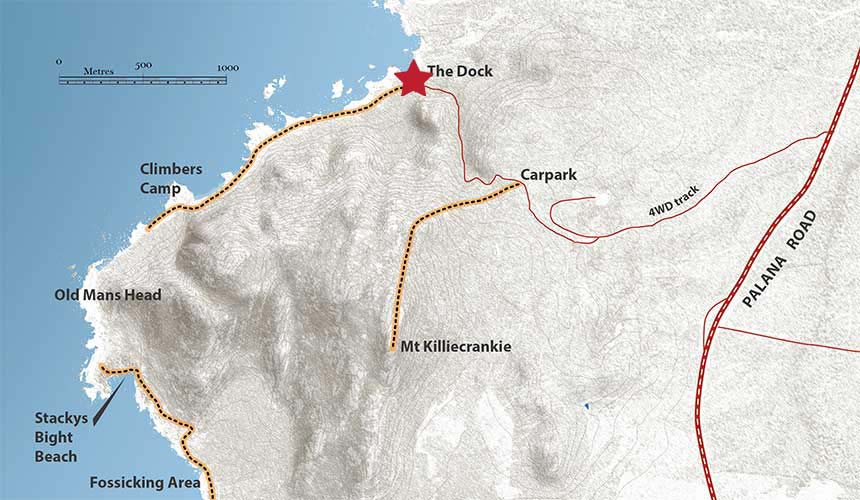 The track has started to deteriorate on the descent to the The Dock and it is suggested to park at the start of the Mt Killicrankie walking track (approximately 2 kilometres from the Palana Road). From here it is a 1 kilometre walk to the The Dock carpark.

From the The Dock carpark, explore the white sandy beaches between the rocky granite headlands near the carpark, or follow a rough, sparsely signposted walking track southwest for about 1.5 kilometres to near the old climbers camp to obtain great views of the spectacular cliff line of Mt Killiecrankie and the spectacular granite landforms. The more adventurous could continue along the coast to Stackys Bight or through to Killiecrankie (approximately 6.5 kilometres, 3-4 hours). 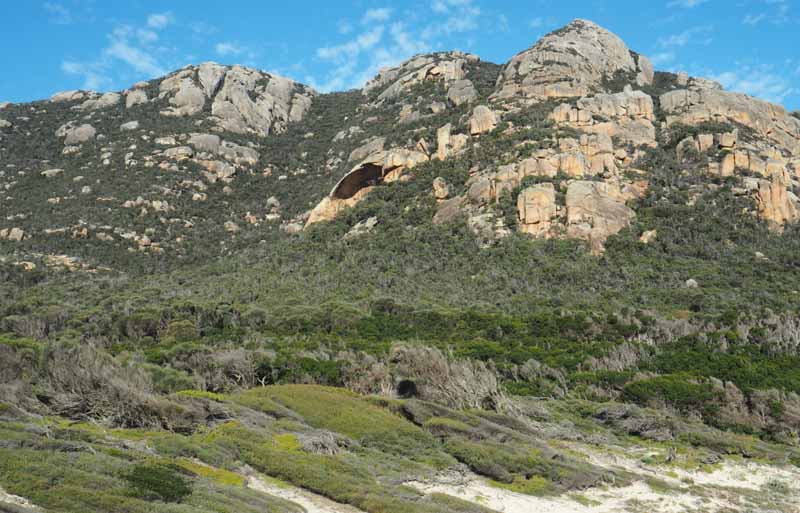 The coastline and rocky slopes of Mt Killiecrankie are dominated by granite. Geologists call this type of granite an alkali feldspar granite. This means that the mineralogy is dominated by the presence of two feldspars (orthoclase and albite), quartz and mica (biotite or muscovite).

The Mt Killiecrankie Granite consists of a wide variety of rock types but is commonly a coarse grained equigranular to porphyritic variety. It is intruded by multiple phases of microgranite or aplite and commonly contains patches of pegmatite.

The pegmatites consist mainly of coarse aggregates of quartz, orthoclase, and micas and sometimes topaz. Prolonged weathering of the granite, microgranite and pegmatites has released the topaz crystals and they are subsequently deposited as alluvium in the creeks and gullies on Mt Killiecrankie.

Today the topaz is highly prised by gem hunters as “Killiecrankie Diamond”. On the walk to the climbers camp, you will see many of the variety of rocks that make up Mt Killiecrankie, some of which are illustrated below. 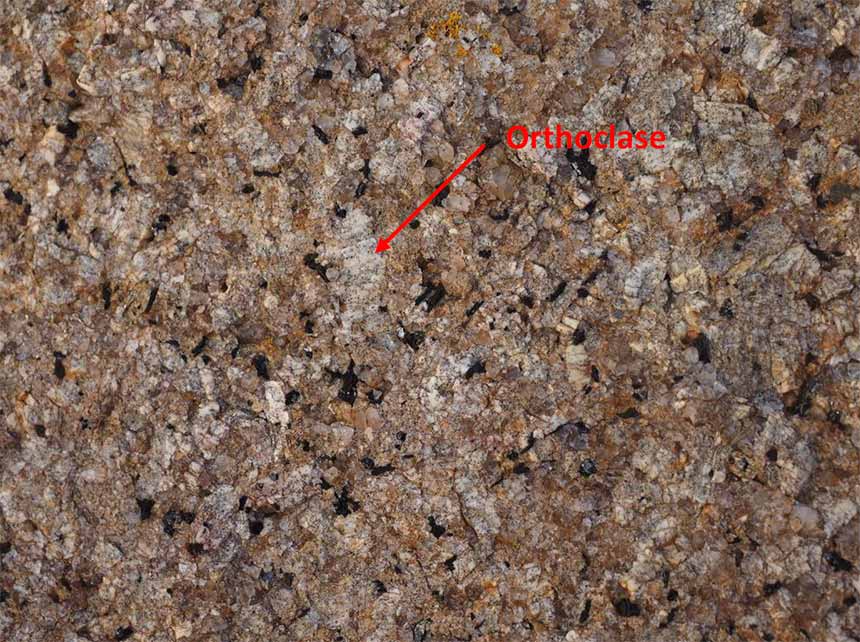 Coarse grained porphyritic granite, the dominate rock type on Mt Killiecrankie. The large cream crystals are a type of feldspar called orthoclase. Quartz is colourless and biotite are the black spots. 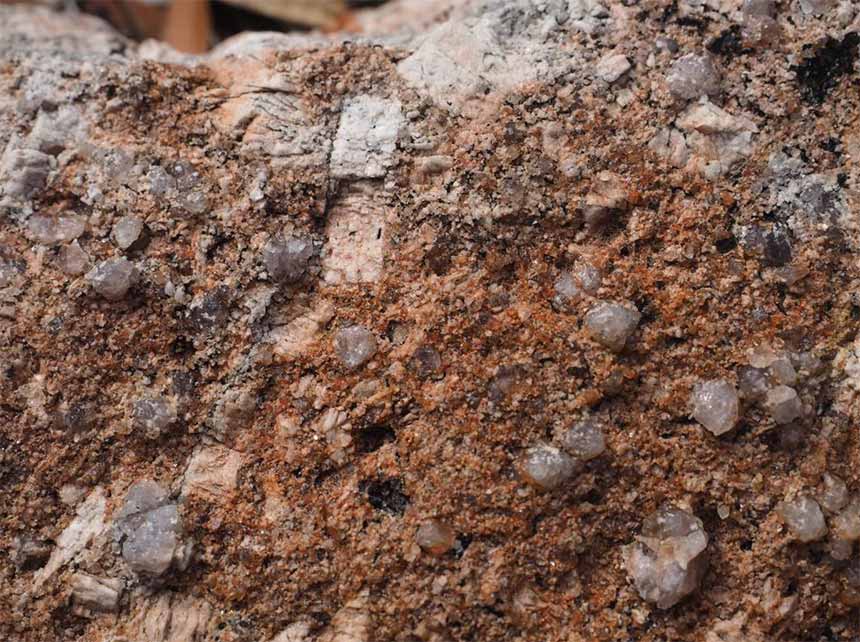 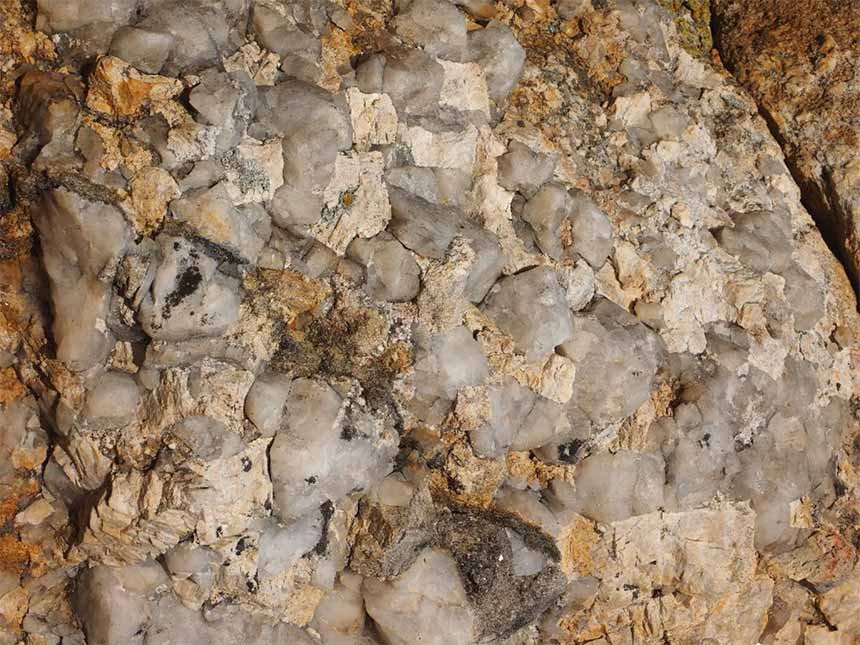 Pegmatite consisting of very large crystals (up to 3 cm) of white quartz and cream orthoclase.

A large tor of coarse grained granite is intruded by a thin (~0.6m wide) microgranite body. Notice the close spaced jointing that typify the microgranite. 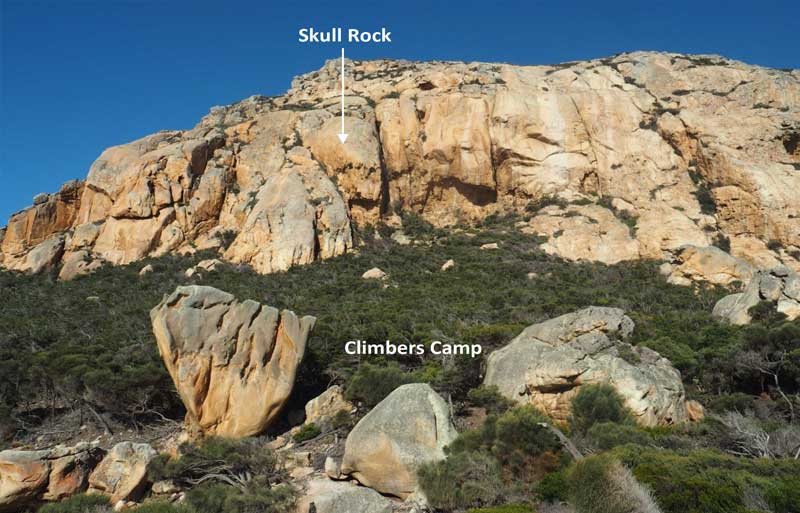 The cliffs of Mt Killiecrankie from near the old climbers camp. The cliffs are up to 160m high and often display large caves. An extensive talus deposit has developed near the camp with some almost house sized blocks that have toppled down from the overlying cliffs. 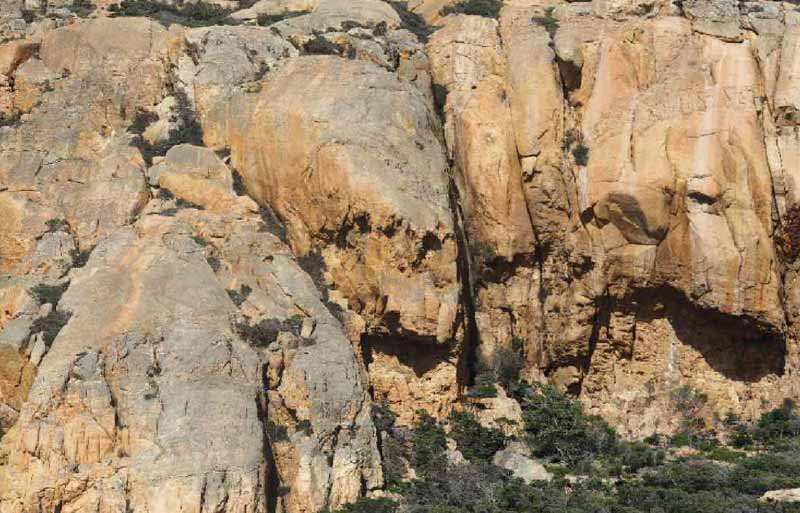 Skull rock is a prominent feature on the cliffs of Mt Killiecrankie above the climbers camp. Close inspection (below) reveals that the cliff consists of a highly complex array of multiple intrusions of microgranite (highlighted in purple) hosted within a coarse grained granite (uncoloured) 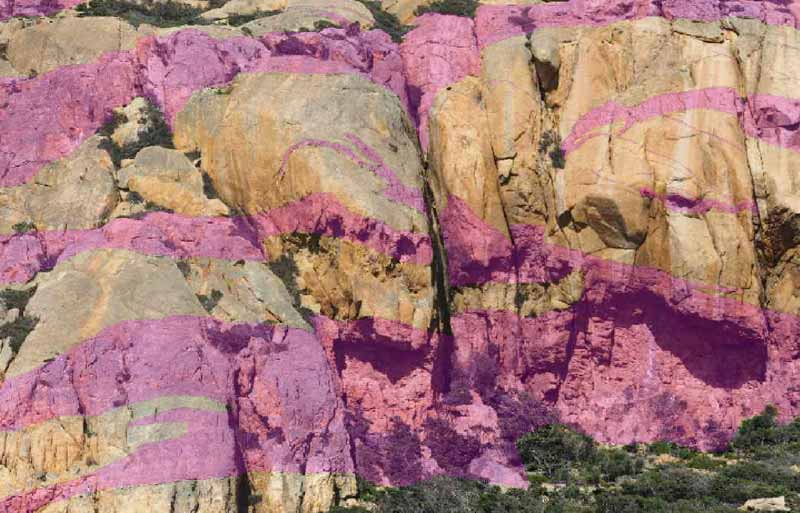 On the walk to the climbers camp, keep a look out for the offshore islands of Craggy Island (19 kilometres to the northwest) and if the weather is fine, The Kent Group (55 kilometres to the northwest). These islands are also composed of granite and form part of the Bassian Rise, an uplifted block of older Palaeozoic rocks that links Northeast Tasmania – Flinders Island - and Wilsons Promontory in Victoria. 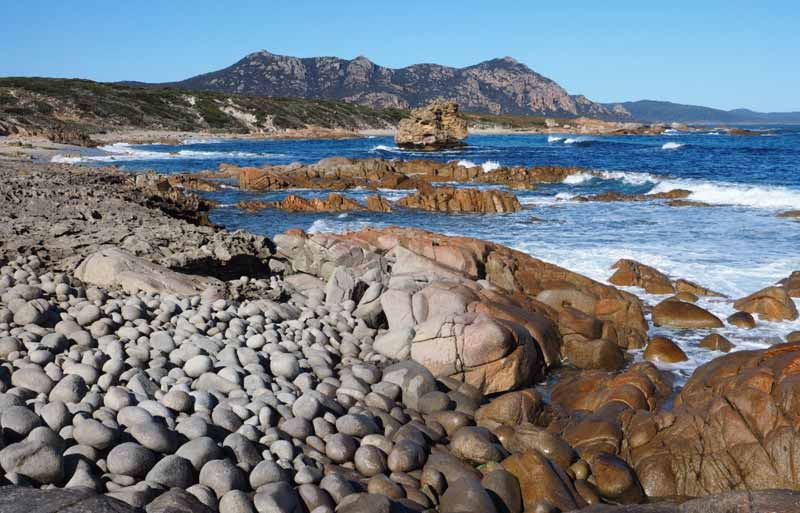 From the Dock it is also possible to walk north along the untracked coast to Blyth Point and Palana. Limestone Bay, with it’s spectacular sea stack composed of calcarenite is a highlight of this walk.