The Allports Beach to Castle Rock Walk is one of the 60 Great Short Walks of Tasmania.

The walk displays many of the geological features that are highlighted by the GeoTrail and traverses a very scenic region of coast with rocky headlands, sheltered bays and sandy beaches. The 6.6 kilometre walk will take between 1.5 and 2 hours return.

Allports Beach is a very quiet white sandy beach between two scenic headlands of granodiorite. It is a popular beach for swimming. A picnic area with toilets is located at the back of the beach.

The granodiorite formed as molten magma deep within the Earth’s crust about 400 million years ago. Later this rock was uplifted and eroded and is now exposed at the Earth’s surface. Visit the nearby Settlement Point Geosite and Sawyers Bay Virtual Geosites to learn more about the features of the granodiorite. 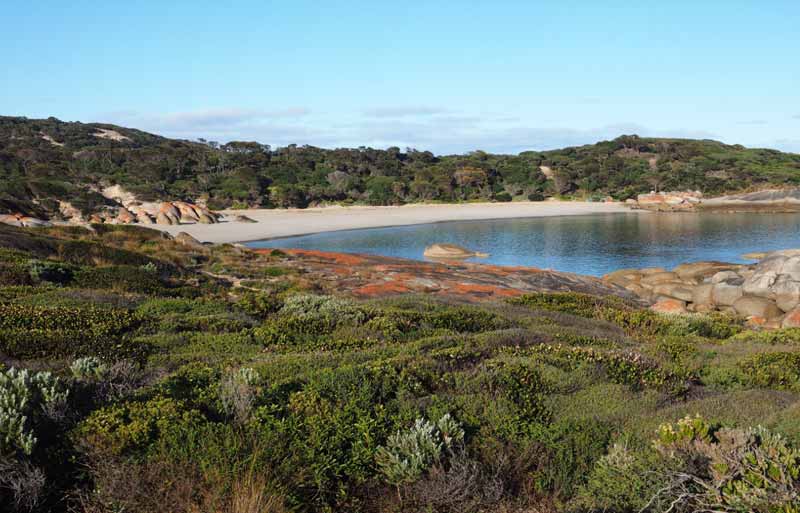 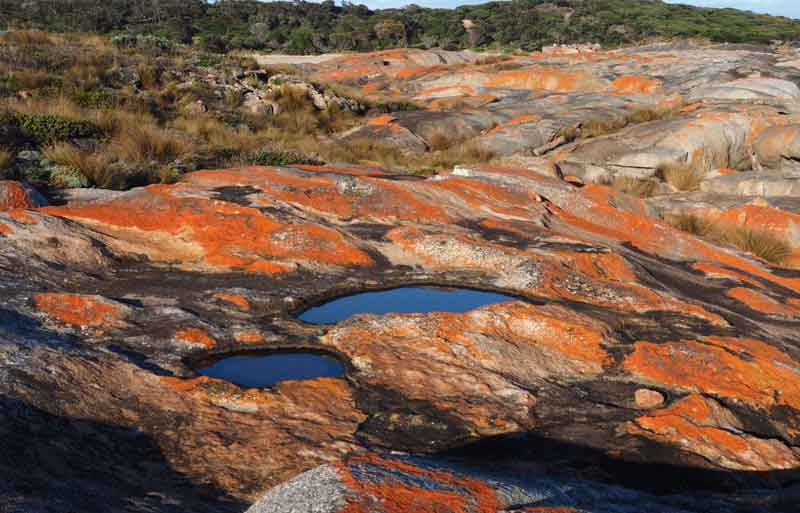 As you round the first point keep a lookout for gnammas or weathering pans on the exposed rocky foreshore. Water from rain or storms collects in a natural hollow on the surface of the rock and accelerates the decay of the rock’s minerals.

Later the water will evaporate, and the decayed mineral grains may be removed by the action of wind, thus enlarging the hollow. With time, the hollow may form a small circular basin called a gnamma or weathering pan. 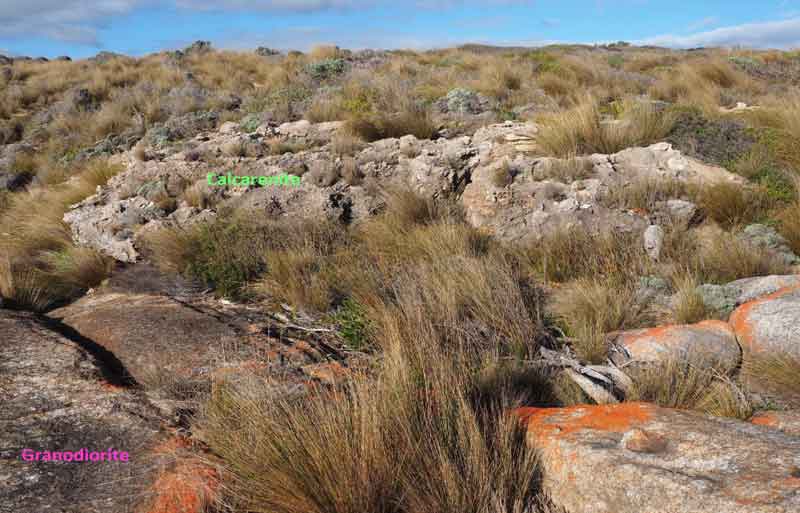 At the edge of the coastal granodiorite and at the base of the coastal dunes, you may see outcrops of calcarenite. This is a type of limestone which is composed of millions of tiny shells called foraminifera.

These were deposited on the sea floor about 100,000 years ago, at a time when the Bass Strait area was flooded by the sea. A change in climatic conditions led to the onset of a major ice age and as water froze in the polar regions, the sea level dropped, exposing the ancient sea floor.

Later the wind eroded and transported the foraminifera rich sands from the old sea floor, leading to the formation of the calcarenite sand dunes that cover much of the eastern part of Flinders Island. As you continue around the first headland you will come to a picturesque boulder beach. Most people think of beaches as large sandy deposits, but in areas where there are frequent storms, the sea can erode, transport and deposit large boulders and form boulder beaches like this.

Continue along the coastal path for about 200m, to Old Jetty Beach. At the east end of the beach there is an exposed contact between the granodiorite and a fine grained igneous rock, composed mainly of quartz, feldspar and mica, called a microgranite. 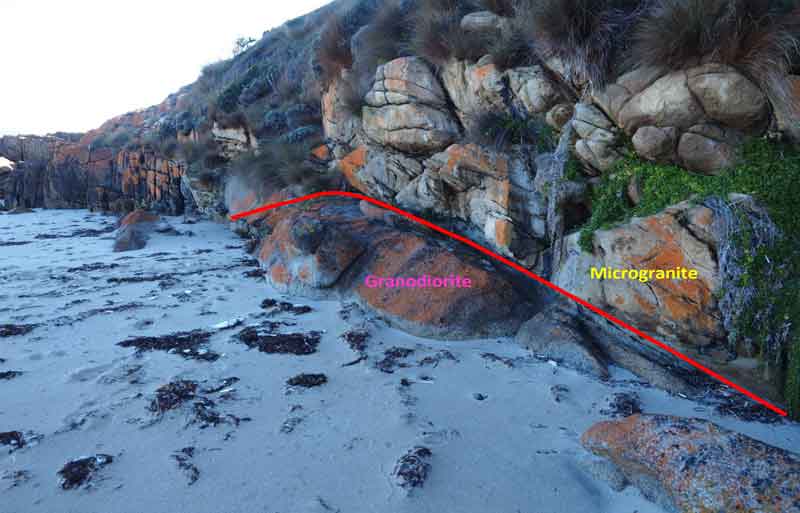 The track then climbs over a small rocky headland composed of microgranite before you arrive at an unnamed sandy beach. At high tides or storms, it is advisable to turn right at a track junction just before the descent to the beach and use the higher level track to continue the walk.

If the conditions are favourable, the unnamed beach contains many features of geological interest (Sites 6-9) and is a great place to explore.

The microgranite in the Emita area is one of the largest occurrences of this rock type on the island. A feature of the microgranite is the spectacular development of tourmaline nodules. These dark patches can have a preferred planar alignment, (Site 6), or they can be randomly oriented (Site 7).

During the final stages of the crystallisation of a magma, elements such as boron, fluorine and tin, can become enriched in the final portions of the magma.

During this stage, a highly aqueous fluid may exsolve from the magma and alter the crystallised parts of the microgranite forming the dark patches, or nodules seen in this rock. The nodules are composed mainly of the mineral tourmaline which is a boron rich silicate mineral. 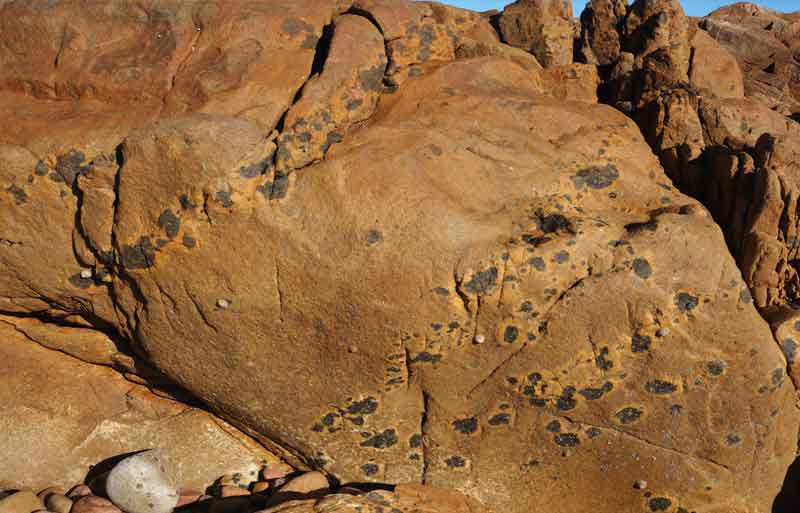 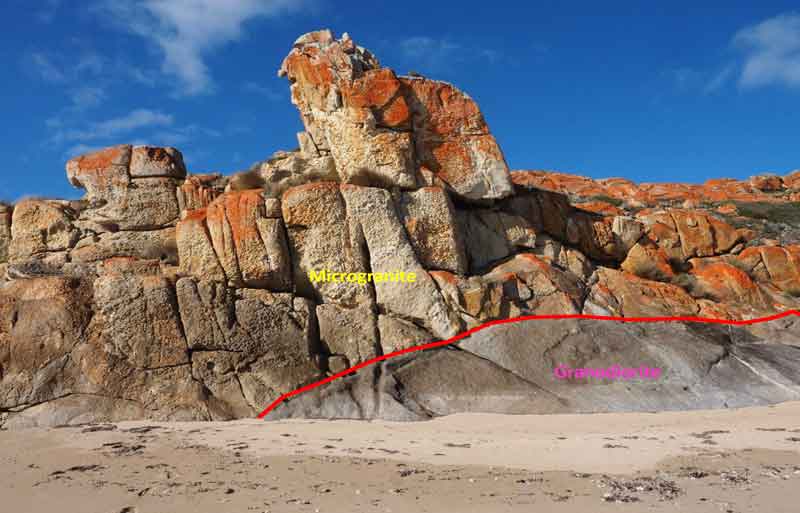 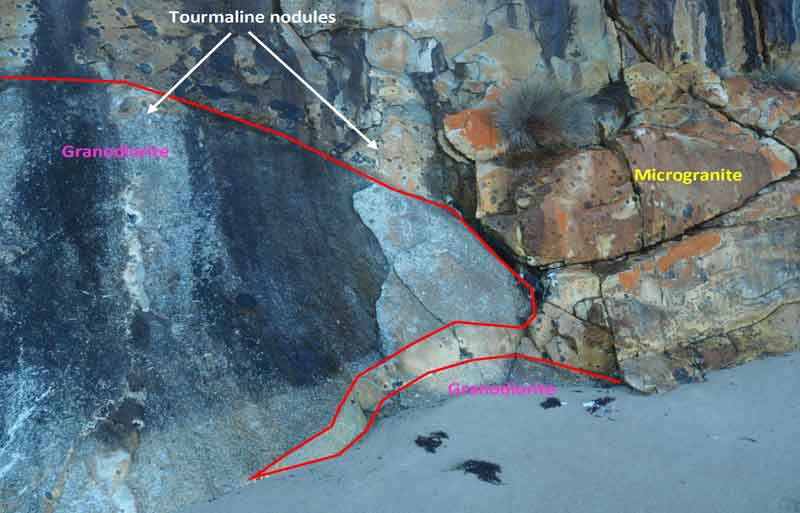 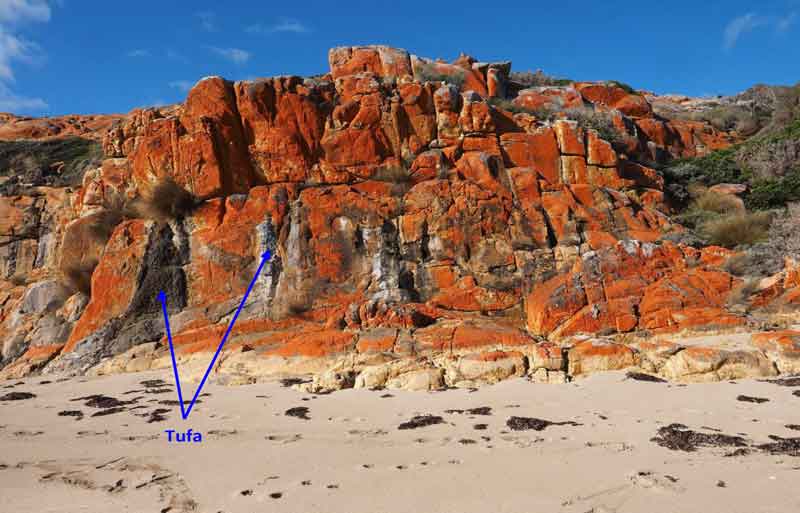 Bluff of microgranite with tufa (secondary carbonate). A thin veneer of Pleistocene calcarenite overlies much lower coastal area in the Emita to Settlement Point area with the best exposures in the Caves Bay area to the west of Allports Beach.

Locations 10-13: Across the headland

From the western end of the beach, the track continues up on to an exposed rocky headland for 600m before descending back to the coast. The area provides great views to the west and north. The headland is predominantly strongly jointed microgranite (Site 10, 11) and the granodiorite / microgranite contact is exposed on the northern side of the headland (Site 12). The headland is part of an old erosion surface and in places a thin veneer of calcarenite may be seen (Site 13). 11. Gulch caused by differential erosion along a narrow zone of highly fractured and veined microgranite 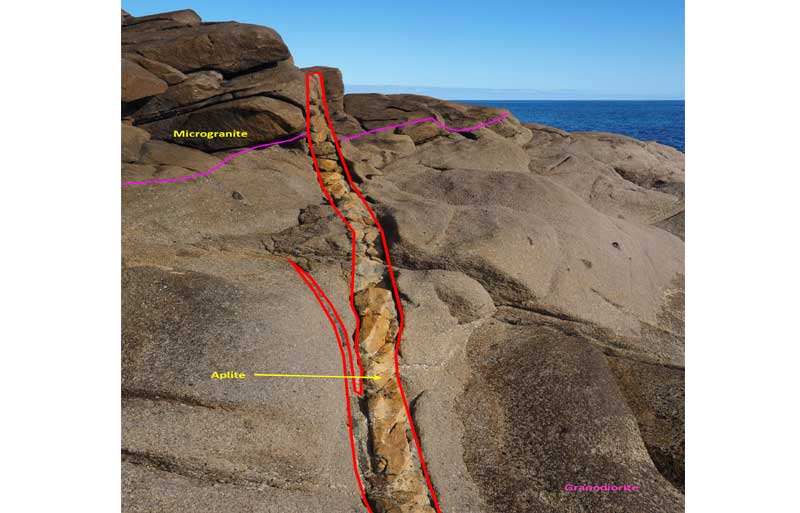 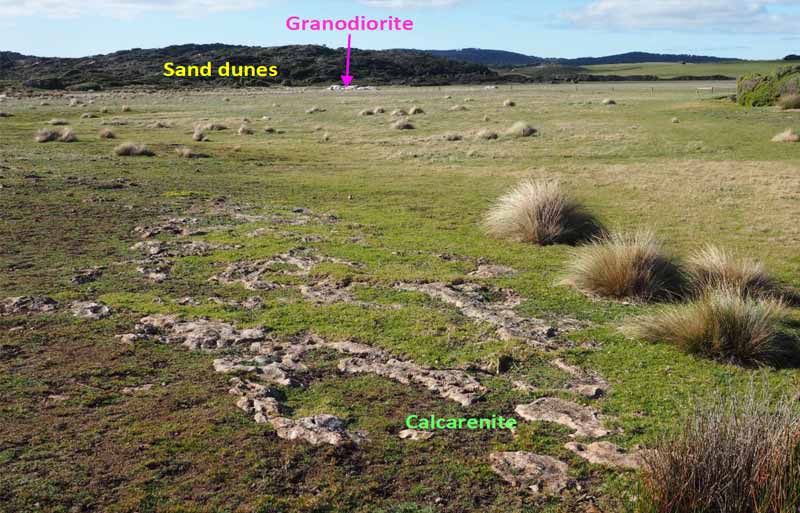 13. A thin veneer of Pleistocene calcarenite which overlies the granodiorite and microgranite, can be seen in places on the open grass land to the south and east of the walking track. This flat area is an old erosion surface which is partially covered by active sand dunes.

From the headland the track descends back to the coast where there are outcrops of granodiorite with some thin microgranite dykes near the start of the beach. From this location it is relatively easy walking along the coast to Castle Rock approximately 1.6 kilometres to the north (Site 15-17). 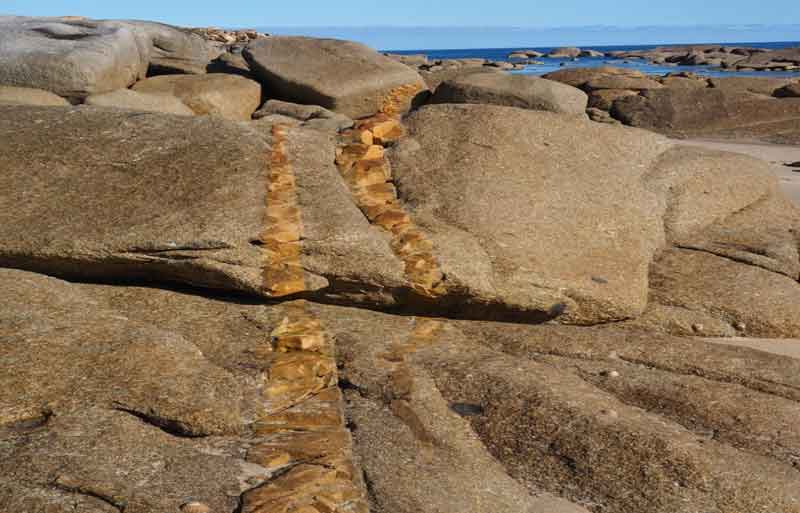 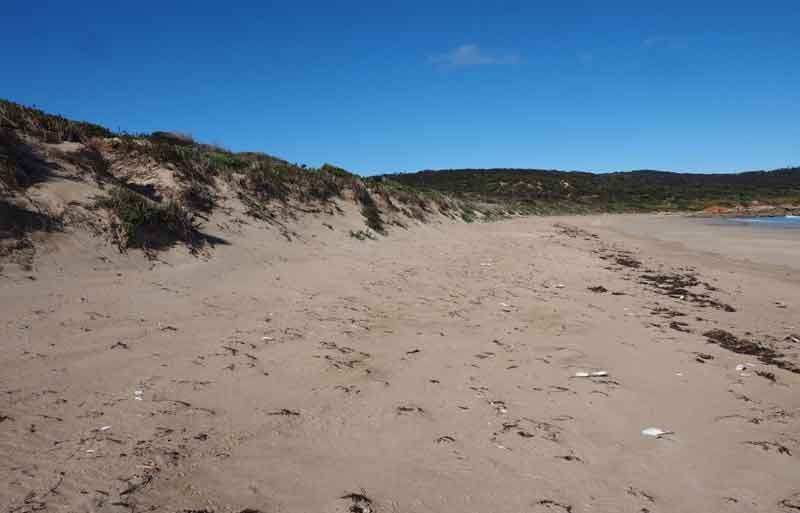 This beach is backed by an extensive foredune of windblown sand. This is part of a dune field consisting of parabolic dunes up to 30m in height that extends inland for approximately 2 kilometres. 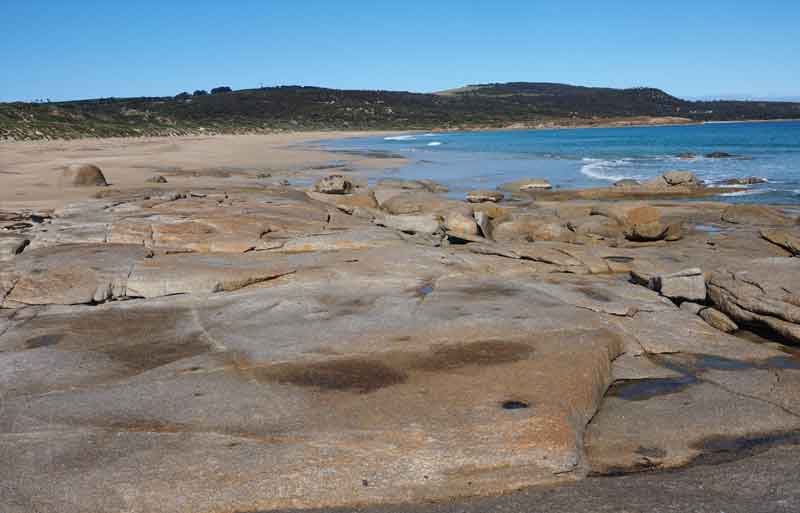 The granodiorite on this low rocky headland has two dominant sets of vertical joints trending 350 and 070 degrees. These joints formed as the magma cooled approximately 400 million years ago. There is also a set of flat to gently dipping exfoliation joints. These form by the changes in the internal pressure of the rock as the overlying rock is removed by weathering and erosion. Castle Rock is one of the best known features on Flinders Island. It is a large tor, about 15 metres high, composed a granodiorite with one very obvious flattish joint developed about two thirds of the way up. The granodiorite is composed of hornblende, biotite, feldspar and quartz and contains sparse mafic inclusions and some feldspar megacrysts.

Weathering and erosion – formation of Tors

Over millions of years the granitic rocks were exposed to the dynamic processes of erosion and weathering. The joints and fractures in the granite become areas of weakness, which over long periods of time are worn away by the action of water and wind. This often leaves large masses of more solid resistant granite – such as Castle Rock standing on its own. Geologists sometimes call these features “tors” – large free standing rock outcrops.

Castle Rock is a great spot to have a close up look at one of the island’s great granites. This mass of rock formed as molten magma cooled deep within the earth over 400 million years ago. The magma cooled slowly allowing crystals of quartz, feldspar, biotite (black mica) and hornblende to form. 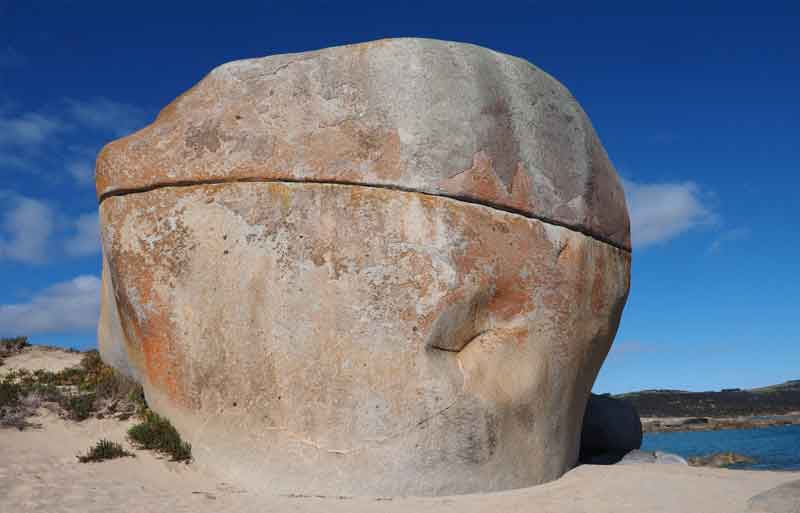 Granites with this combination of minerals are often called Granodiorite. If you look closely you may also find larger dark inclusions in the granite which have been caught up in the magma as it cooled. These may have been broken off from the surrounding rock walls in the magma chamber or are remnants of an earlier, more mafic magma.

As the granitic mass cooled and solidified, fractures and joints would have appeared. At a later time more molten magma was intruded into the areas of weakness, along the fractures or joints, forming features called “dykes”.

As you examine the outcrops near Castle Rock look out for long linear or tabular vein like intrusions of slightly different rock cutting across the massive granodiorite.

The material in the dykes is different from the original granodiorite. Its lighter coloured and finer grained and consists of quartz, orthoclase feldspar and white mica. It is more like a granite in composition (ie more felsic), but has a much finer grain size. 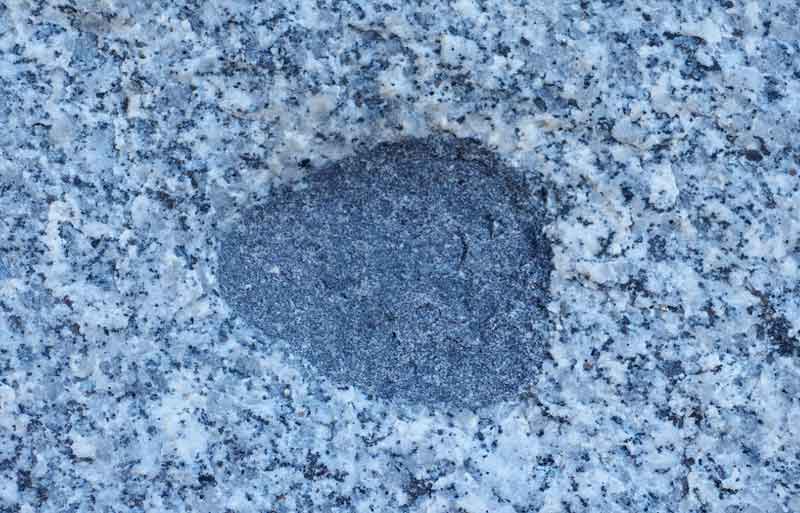 As you wander around the Castle Rock area you will notice the zone of sand dunes that extend along Marshall Bay from just south of Castle Rock to about 10 kilometre north. Marshall Beach and the active fore dunes and parabolic dunes have developed since the sea level reached present day level about 6000 years ago. This younger dune field, which extends inland for about 2 kilometres, has developed on and has largely concealed an older sequence of lithified calcareous sand dunes. These wind blow sands were deposited on granite bedrock as sea level rose between 17,000 to 6000 years ago following the end of the last ice age.

The calcareous sands are composed of millions of minute marine animals called foraminifera. The older lithified calcareous sand dunes are best seen along the Palana Road just near the turn off to Castle Rock Point.