Located in the northwest of Flinders Island, Killiecrankie quickly became an object of geological interest in the early 1800s when a form of topaz known as the Killiecrankie 'diamond' was found.

Today the striking beach setting surrounded by the granite ranges that are home to Mt Killiecrankie and Mt Tanner make the location one of Flinders Island's best known scenic attractions.

They are a form of topaz, a silicate mineral that has crystallised out of the granite magma during the final stages of its cooling cycle deep within the earth.

Pegmatites in the granite

As you walk out to the point you can see examples of pegmatites in granites that produce the Killiecrankie ‘diamonds’.

Pegmatites are patches of very large crystals that form only in the final stages of magma crystallisation.

They contain exceptionally large crystals of quartz, feldspar and mica and also minerals (such as topaz) that are rarely found in the granite or other types of rocks.

The granite and associated pegmatites in the Killiecrankie area have been exposed and weathered at the earth’s surface over millions of years.

Today most of the topaz is recovered from recent sand and gravel rich deposits.

Quartz, tourmaline, cassiterite and blue beryl are also associated with the topaz.

There is a designated fossicking area on the north side of Killiecrankie Bay where you can prospect for topaz.

The best specimens are prized by gem collectors and are often used in the making of jewellery. 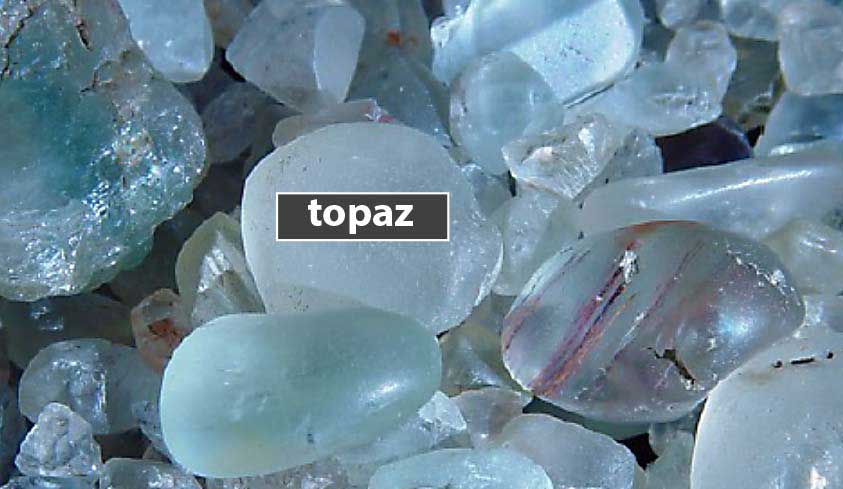 Looking back at the surrounding landscape ...

As well as the opportunity to take a closer look at the granite outcrops beside the beach, Killiecrankie presents a platform from which you can look back at the surrounding hills and ranges.

These are very interesting and complex environments. Of particular interest in this precinct is the location of the former Tanners Bay Tinfield close by the road intersection leading into Killiecrankie.

This was the first place that tin mining occurred on the island in the 1870s. Tin is derived from cassiterite – a widespread minor constituent of igneous rocks.

It is found in high temperature quartz veins and pegmatites associated with granitic intrusives.

These veins commonly contain other notable features including tourmaline, wolframite and topaz.

The tin mining area at Tanners Bay was worked by miners sifting through the sediments that accumulated in the valleys between the stand out areas of granite. These sediments comprise a type of limestone that was formed out of sand dunes. This means they are very soft and easily worked.

Because the limestone is recent it sits on the surface and is probably no more than 10 metres thick.

This means that you don't get major limestone features like large caves and arches such we typically expect to find in other karst areas.

You do however get little caves and sinkholes. It’s very porous so the ground water goes through it and it just keeps wearing it away.

This creates very well drained soils that are good for vineyards. Some areas of the island by contrast are very clayey and need clay breaker treatments as the soils doesn’t have limestone but rather is clay from the feldspars degrading.