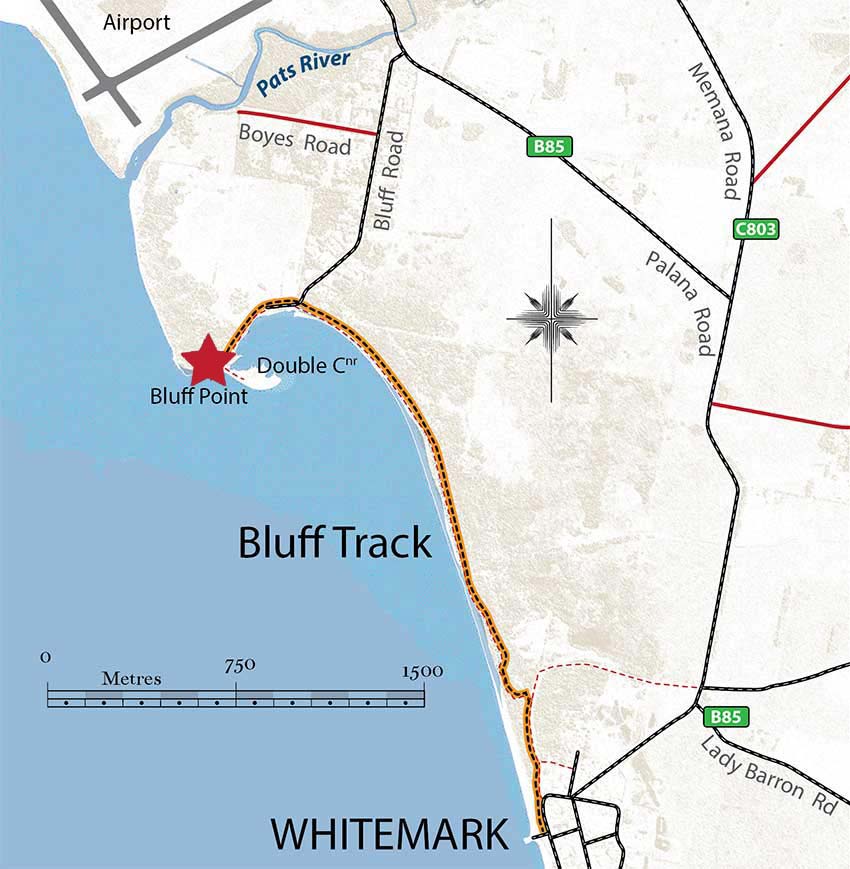 It is easy to see why the view from the end of the Bluff Walking track, at the western end of Bluff Road, is so popular with artists and photographers. While the view of Mt Strzelecki is imposing, there are also other interesting ancient and more recent geological features to examine. 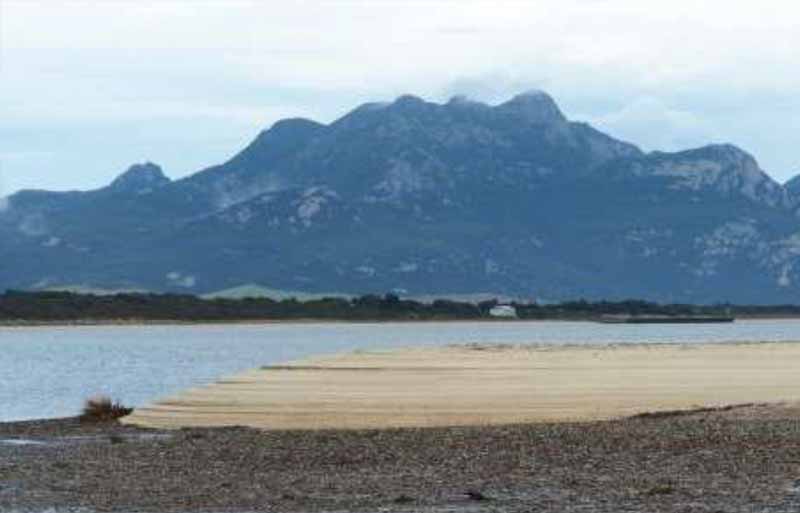 The iconic view of Mt Strzelecki is sure to catch your eye. Mt Strzelecki consists mainly of granite, formed from cooling magma deep within the earth’s crust over 370 million years ago. Eventually the cooled rocks were uplifted, folded and eroded. The process of weathering and erosion continues today, sculpting amazing shapes out of the ancient granite, and breaking down into boulders, pebbles and eventually tiny grains of sand.

If you follow the walking track to the rocky headland you might come across sections of fine grained dark slate and quartzite. These are the most ancient rocks in the Furneaux Group, dating back up to 420 million years ago. They originally formed as sediments deposited in deep marine conditions, were buried and metamorphosed or changed by heat and pressure into the rocks you see today.

From this spot you can see the ongoing process of deposition – in the form of the small sand spit in front of you. The coastal area is obviously subjected to the action of wind and waves. Often waves reach the beach at an angle and sand is moved along the beach in the direction the waves were moving.

This is called longshore drift. In this way sand and pebbles can be moved along a coast and deposited in other places. Sand spits and bars can form because of longshore drift.

Spits are narrow ridges of sand or pebbles which are joined to the land at one end and with the other end in deep water. They often form across a bay or river mouth as longshore drifting moves beach material along the coast. 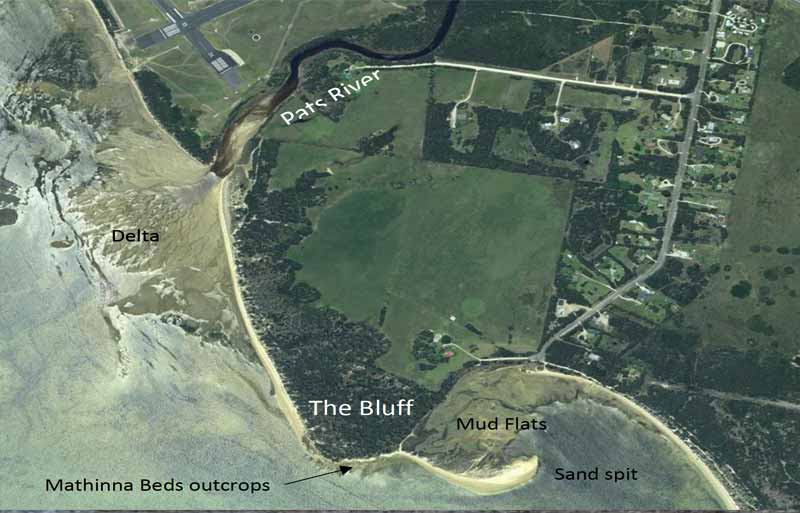 Another interesting feature involving the more recent deposit and build up of sediments occurs a bit further to the north. The Pat’s River Delta is not visible from the Bluff, but is only a short walk along the beach to the north of the Bluff (easier at low tide).

Rivers erode the countryside they travel through and carry the sediment downstream towards the sea. A delta is a triangular shaped deposit of sediment at the mouth of a river. You’ve probably heard of the Mississippi or Nile Deltas? Deltas are formed when the river carries a heavy load of sediment (for instance after heavy rain) and the load is deposited in the sea at a faster rate than the waves and currents can take it away.

As the sediment builds up, the river is forced to divert, split up and form smaller channels (distributaries) to find a way to the sea. Over time lagoons can form between these channels. They can fill in and become swampy. Eventually, as the process continues, the older part of the delta may become dry land.

Alluvial tin was first discovered in Officer Creek, a small tributary of North Pats River (about 5 kilometres up stream form the river mouth) in 1896.

The tin leads were generally small and discontinuous. Sometimes the gravel cemented together making it difficult to work and during dry times there was a lack of water. 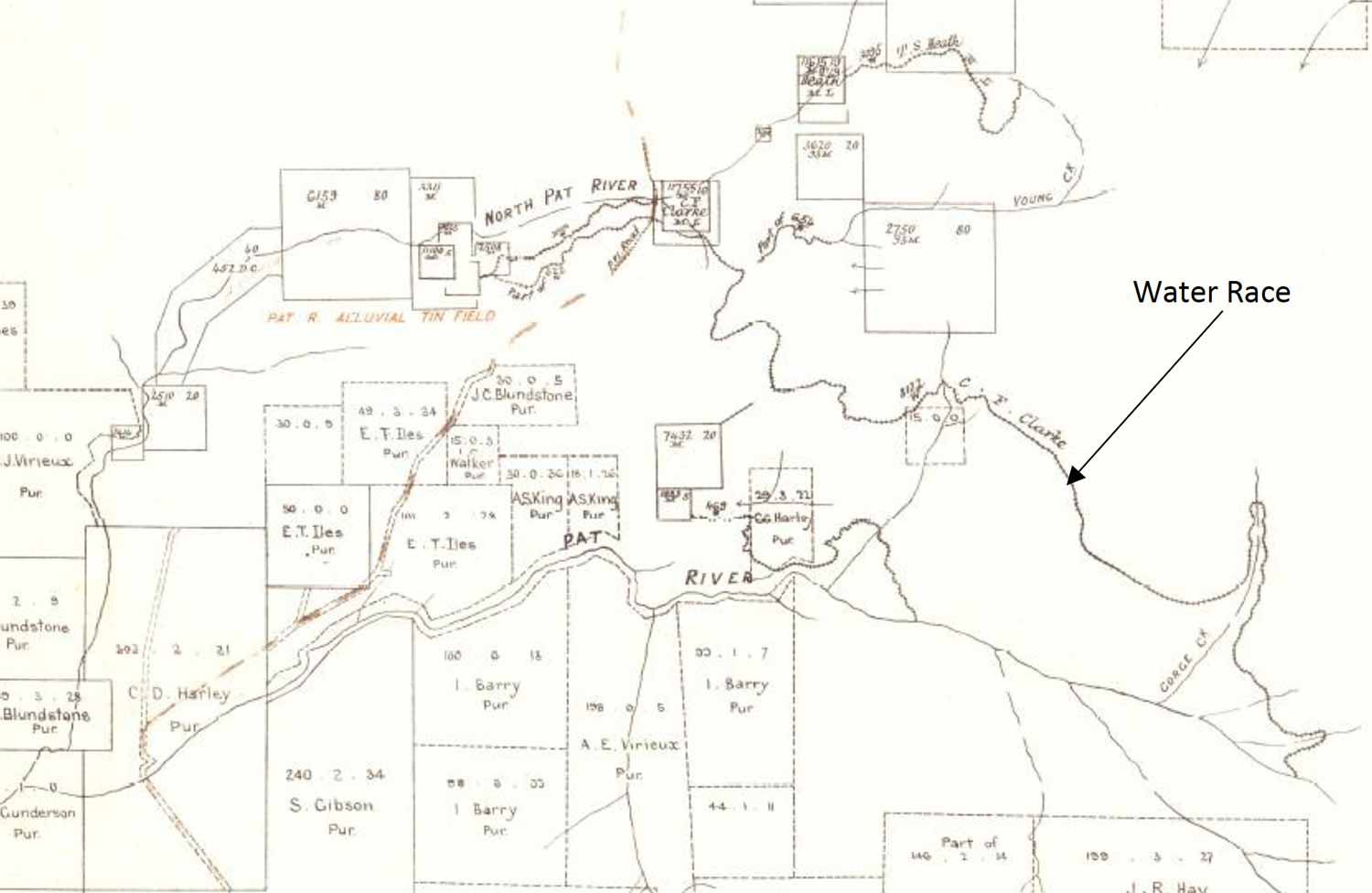 During the weathering and erosion, granite breaks down into boulders, pebbles and gravels, freeing a range of minerals including cassiterite (the main source of tin). When the granite derived sediment reaches a drainage system, the cassiterite, being a chemically resistant and heavy mineral, is readily concentrated during deposition forming alluvial placer deposits.

Although this process continues today, most of alluvial tin deposits in the Furneaux Group formed between 5 – 20 million years ago.

The pebbles consist chiefly of waterworn quartz in which tourmaline is sometimes present but quartzite and granite pebbles are also found.