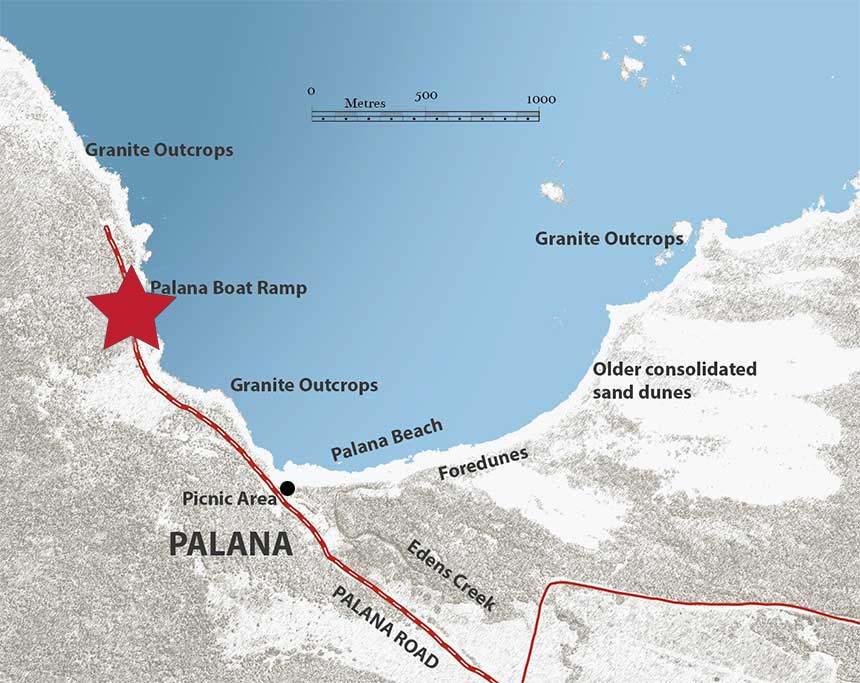 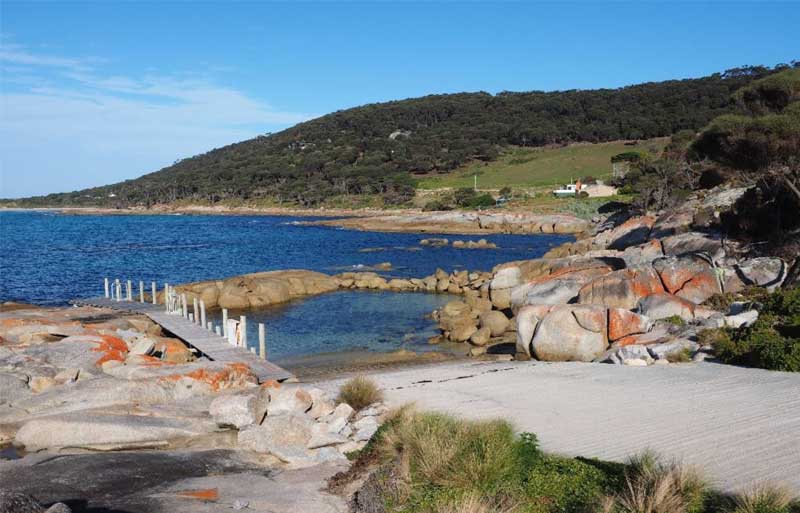 From the Boat Ramp, there are extensive views towards Palana Beach and across Sisters Passage to the Sister Islands. 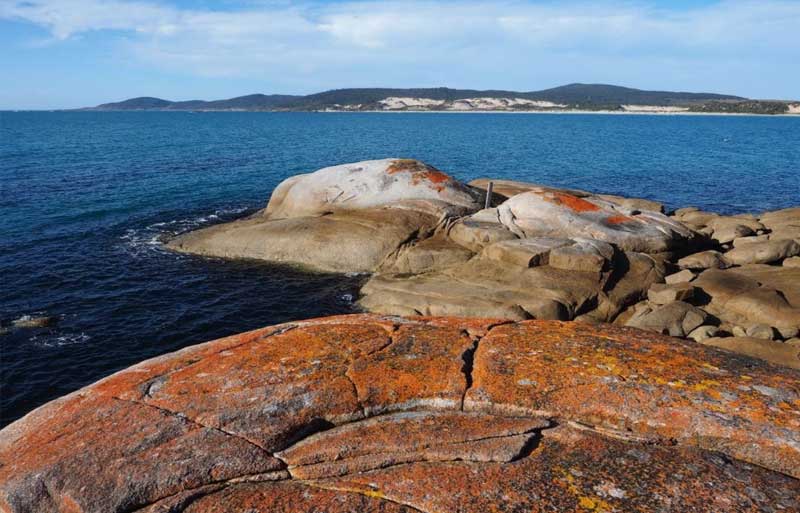 The familiar lichen covered granite, which forms the rocky shoreline is obvious in this area. These rocks crystallised from a molten magma deep underground about 400 million years ago (Devonian). The crystals of quartz, feldspar and biotite that you can see if you look closely formed as the magma cooled and solidified. The rocks were eventually uplifted and exposed to various types of erosion and weathering, creating the interesting shapes and structures we see today. 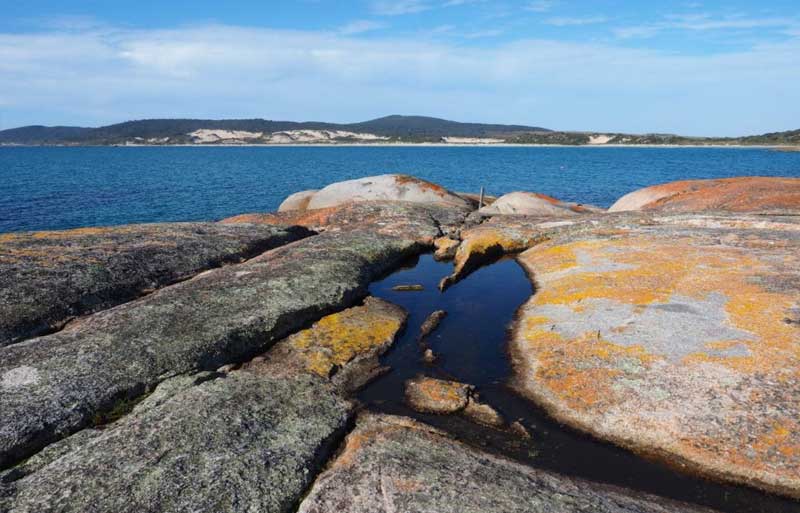 If you explore the granite boulders at the Boat Ramp, you’ll notice rock holes, containing water. These indentations are the product of weathering caused by water. They are called Gnammas, a word with an Aboriginal origin used to describe a rock hole, usually in granite, and often containing water. 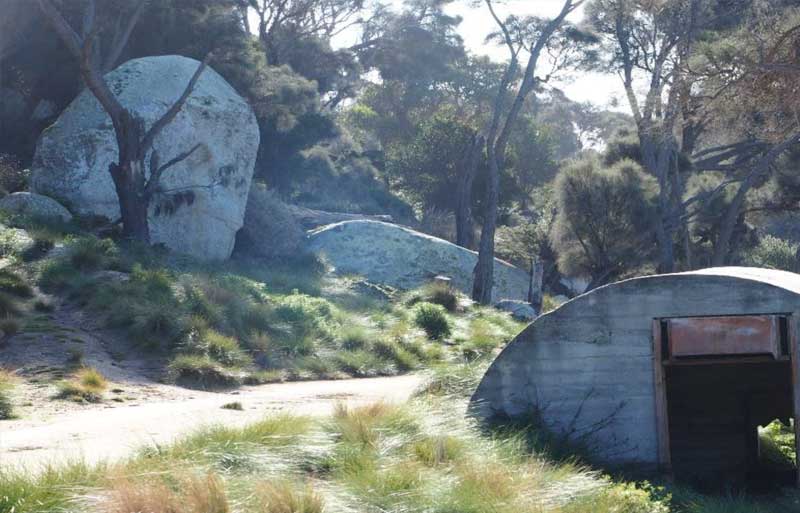 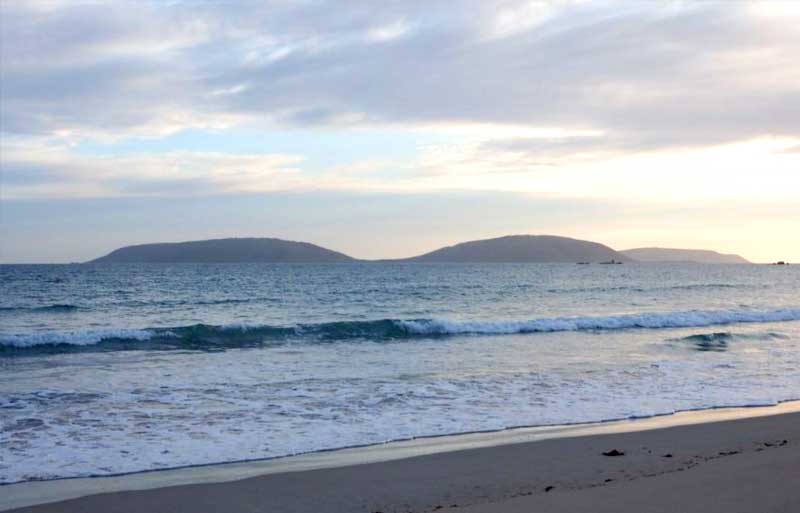 They are separated by Sister Passage, a relatively deep channel which has been scoured by tidal currents to depth of about 155 metres.

Both islands are composed of the same granite bedrock that can be seen at the Palana Boat Ramp.

A scientific expedition to Inner Sister Island in 2010 also identified:

• the presence of minor igneous dykes of dolerite

• interesting fabric within the granites –spectacular zones where the granite has a very high abundance of mafic inclusion and or xenoliths. These features were considered worthy of inclusion in the Tasmanian Conservation Database.

• gnammas (rock pools) in some of the granites formed by the erosion of xenoliths. (Eberhard, R in Inner (West) Sister Island Scientific Expedition 2010, S. Harris and A Reid)

It is not surprising that the actions of the wind and the sea have played an important part in the formation of the interesting geological landscape in this area. Weathering, erosion and deposition over thousands of years, have produced the beautiful sandy beach, the sand dunes and the soil supporting the vegetation behind the beach.

Palana Beach is easily accessed from the picnic area and offers the opportunity to observe some interesting coastal features. The beach was formed by large waves depositing sand, pebbles and a few boulders at the shore. The beach extends from the wave base (furthest from the shore), across the near-shore and surf zone, to the swash zone where the waves run up to the beach. 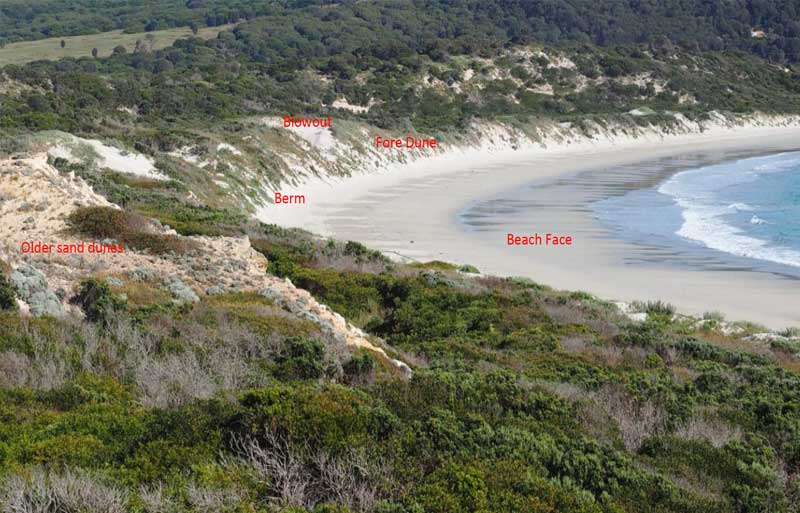 The wave base is the depth from which the waves can move sand shoreward. The near shore is where waves interact with the seabed, and in so doing shoal and refract until they reach shallow water and break. Shoaling is when waves increase in height as they enter shallower water, while refraction is the bending of waves. If you look out at sea from the beach, you can often see the shoaling and refracting at Palana. The surf zone is a dynamic area of breaking waves and is associated with wave-generated currents.

Finally, the waves reach the shoreline, collapse and run up the beach as swash and return as backwash in the swash zone. The swash deposits sand and builds a seaward sloping swash zone which is usually backed by a nearly horizontal dry berm or bank where most people sit when they visit the beach.

Ocean waves are created by the wind. The stronger the winds the more powerful the waves and the more eroding they will do. When a wave breaks on the shore it becomes more turbulent, creating the ‘surf’. Beach faces are generally eroded by the surf in winter from high energy waves.

In summer usually waves are not so energetic and beach faces get built up from the deposition of sand and sediment.

Depending on which time of year you visit Palana Beach, it will look different. There is constant erosion and deposition and as one coastal area is being eroded another is being built. Most erosion on coasts is due to the action of waves. Erosion occurs not only in the surf zone, but also below and above average sea level. 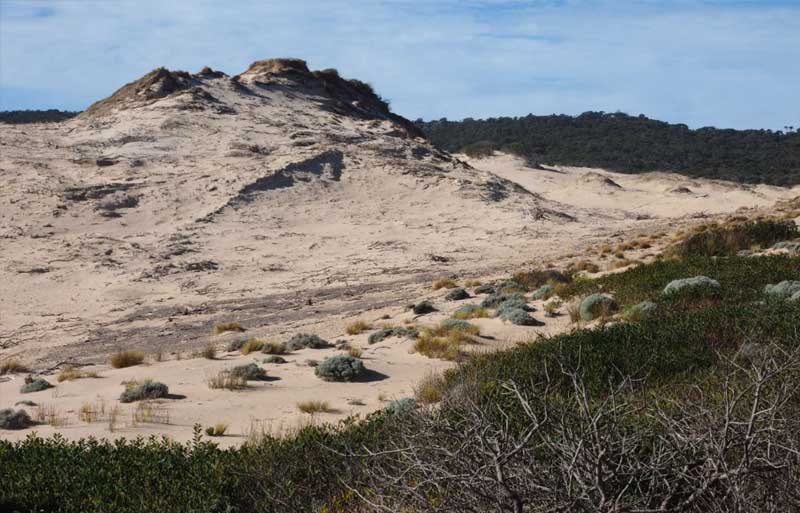 The beach at Palana is backed by the largest region of active sand dunes on Flinders Island with dunes up to 50m high and extending up to 4 kilometre inland.

The sand dunes are formed by strong winds blowing sand particles inland from the beach. The sand is deposited when the wind drops or it is trapped by vegetation.

Sand dunes can take different shapes depending on the direction of the wind and the amount of sand available. Parabolic dunes are horseshoe shaped. Where the wind is strong and sand is limited, the dunes form longitudinal ridges only a metre or so high and several kilometres long.

Palana is a high energy beach in an area with strong onshore winds. This has contributed to the formation of a zone of fore-dunes at the back of the beach. Secondary transgressive dunes, blowouts and deflation basins may develop may occur if the fore-dune is damaged.

If a blowout moves inland it assumes a parabolic dune shape with stabilised sides and a migrating front. The large areas of white sand visible at the back of Palana Beach have formed in this way.

Blowouts and deflation basins will continue to develop until the dune erosion has exposed the water table or a hard substrate.

These were deposited in an ancient valley developed on granite bedrock as sea level rose between17,000 to 6000 years ago following the end of the last ice age. An old palaeo-surface discovered under the active dune field has provided evidence of aboriginal occupation dating back 7,150 years ago, thus predating the establishment of the modern sea level. 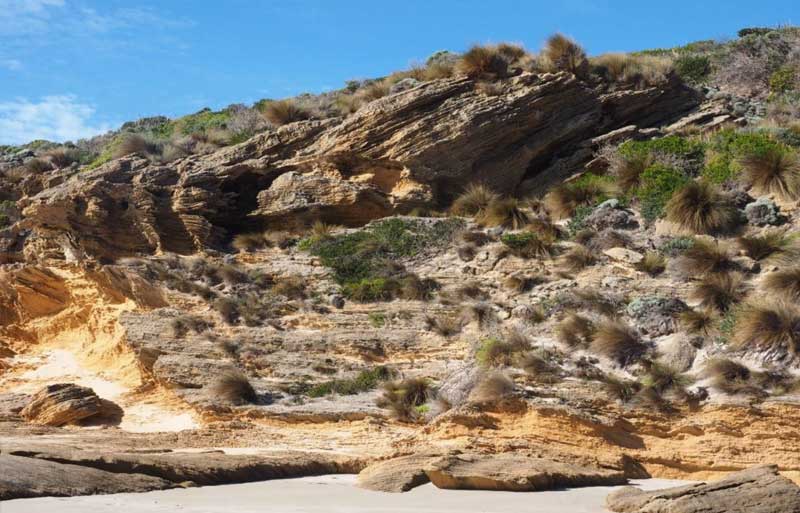