The natural arch at Stackys Bight is one of the most famous coastal features on Flinders Island. The Geosite can be accessed via a coastal walk along Killiecrankie Bay from the Killiecrankie Geosite. It takes about 3-4 hours (7-8 km return) to complete the easy to moderate grade walk, however there are some short sections along rocky coastal outcrops that can be hazardous when wet. The walk is best undertaken at low tide. 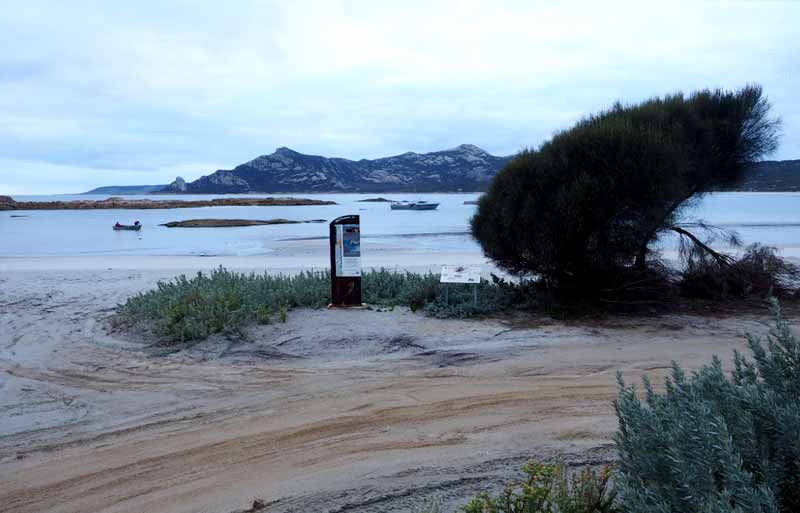 Killiecrankie Creek drains from the exposed elevated granite outcrops in the Mt Tanner and Mt Boyes area. This drainage has been superimposed over an older Tertiary drainage system. At this site, the Tertiary deposits, including a 20 million year old basalt lava flow, are concealed beneath active beach and dune deposits and Pleistocene calcarenite. 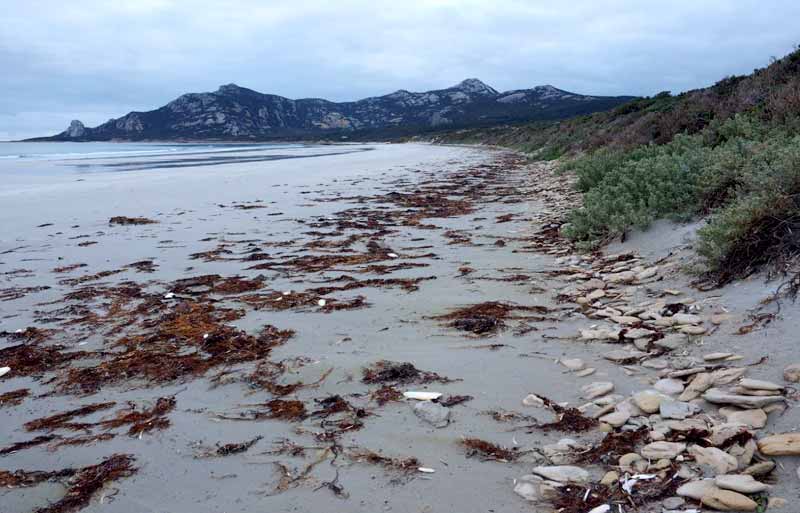 Bouldery deposits litter the shoreline along Killiecrankie Beach. These are composed mainly of flat disc-like clasts of Pleistocene calcarenite with rare granite and basalt. The clasts were eroded as sea level rose following the end of the last ice age about 6000 years and were deposited by storms during beach formation.

Notice also the extensive fore dune that has developed at the back of the beach. This is part of an extensive dune system that has migrated 1.2 kilometres inland and reaches heights of up to 40 metres.

Outcrops of cross bedded Pleistocene calcarenite. These deposits are composed of tiny organisms called foraminifera which were deposited in shallow marine conditions between 2.5 million and 120,000 years ago. The onset of cold glacial conditions caused the sea level to drop and the deposits were exposed as sand on the newly formed land surface. Strong westerly winds then transported the sand which subsequently formed sand dunes on the exposed Palaeozoic basement and Tertiary sequences on Flinders Island. A sea level rise during the last Interglacial period about 100,000 years ago has caused local erosion of this sequence in coastal areas. The now lithified sand dunes typically form easily eroded cliffs and rock platforms in the Killiecrankie Beach – Stackys Bight area and are overlain by an irregular upper layer of secondary carbonate and active dunes. A common feature of the calcarenite dunes is cross bedding as shown by the variable dip of the foreset beds across the erosion surface in the above photo. In this photo there are two distinct sand dunes (A and B) separated by the erosion surface. From the end of the beach, continue along the rocky shoreline for 700m to avoid Private Property. After about 500m you will reach the designated Fossicking area, where a creek draining from the exposed granite in Diamond Gully provides prospectors with an opportunity to find topaz in the alluvial gravels. 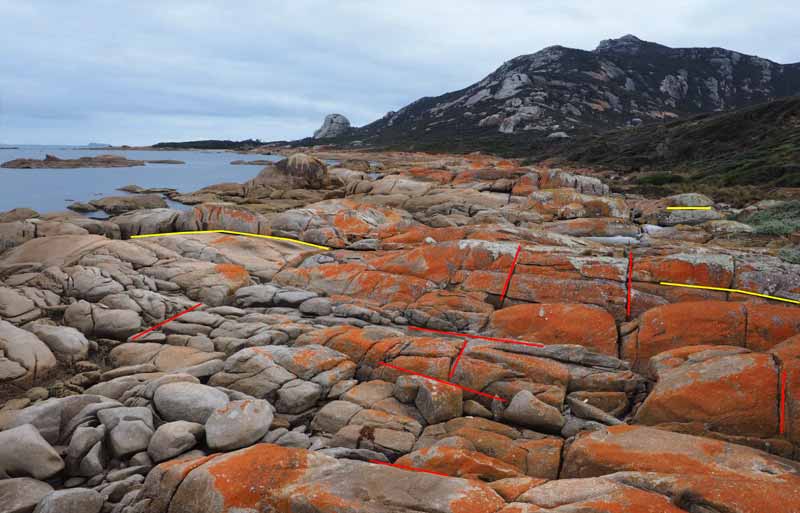 Part of the rocky coastal section enroute to Stackys Bight. Notice the two sets of joints in the granite. The subvertical joints (shown in red), trending approximately north-south and northwest-southeast, formed when the granite cooled about 390 million years ago. The flat joints (shown in yellow) have continued to form over the last 94 million years when the granite was uplifted and eroded. Both joints play a fundamental role in defining the spectacular granite landscape we see today. Continue along the rocky coast for about 100m and look for the rock cairns which lead inland to the walking track to Stackys Bight. 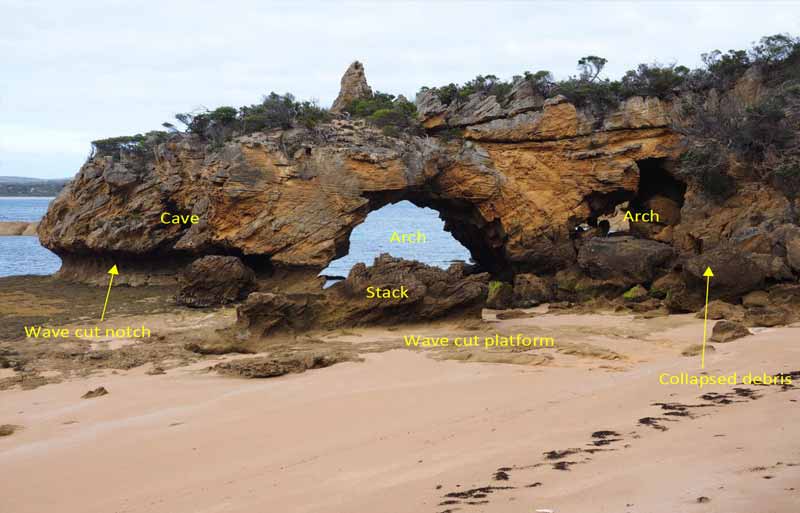 At Stackys Bight there is a spectacular headland composed of Pleistocene calcarenite which was deposited as windblown sand between 2.5 million and 100,000 years ago. The headland provides a great example of several features commonly developed during coastal erosion. The headland at Stackys Bight displays at least three individual layers of cross bedded calcarenite defined by variable dip of the foreset beds (dashed lines). Each layer represents an individual sand dune, which is separated by a sub-horizontal erosion surface (solid line). The angular discordant between layers A and B and the steep foreset beds in layer A have been important factors in the development of the arch. Debris from a recent roof collapse can be seen in the smaller arch on right. With time the large arch will collapse, possibly leaving a new stack and more broken rock debris. 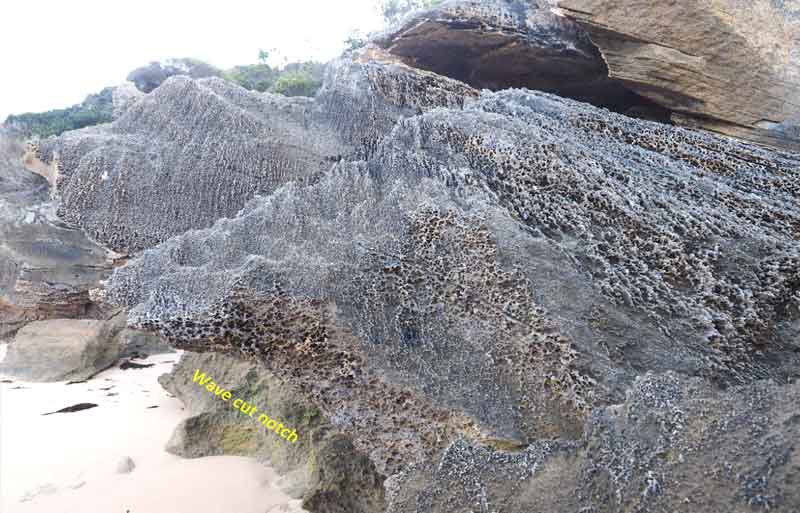 Chemical weathering of the calcarenite has produce spectacular honeycomb and karren textures in the spray zone above the high water mark at Stackys Bight.