Strzelecki Peaks is the highest mountain in the Furneaux Group and at 782m high it commands extensive 360 degrees views. On a clear day you can even see mainland Tasmania to the south.

The distinctive ragged skyline of Strzelecki Peaks is defined by large dome-like outcrops of granite with minor microgranite and some pegmatite. This is the same granite that can be seen at the Trousers Point and Fotheringate Bay Geosites. The strongly jointed nature of the granite and the steep slopes produces extensive talus deposits that mantle the dome-like structure on the mountain sides. 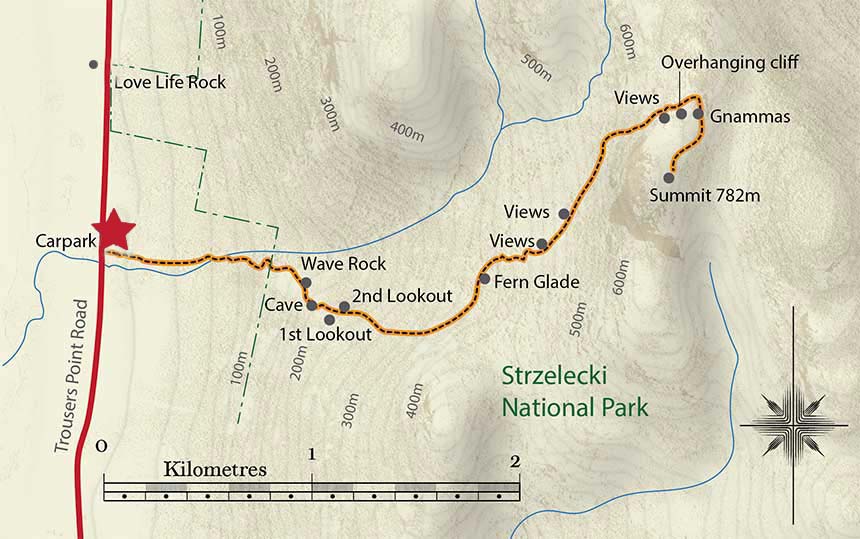 The return walk to the summit takes about 4-5 hours (approximately 6 km return) and some may find the steep, sometimes rocky and slippery climb challenging. However, you can experience this amazing landscape by completing a shorter walk on the lower slopes to either the first or second lookouts.

SELECTED FEATURES OF THE WALK

On the drive to the start of the Strzelecki Peaks walking track, you may have noticed a very large boulder sitting in a field on the side of the road.

Perhaps you may have wondered where this boulder may have come from? There are some low flat outcrops of granite on the coastal plain nearby but this boulder and many others near the roadside are in fact part of the extensive talus and scree deposits that mantle the steep slopes of Strzelecki Peaks.

The first part of the walk is along Fotheringate Creek which has eroded through the extensive talus deposits (notice the large boulders) that mantle the lower slopes of Strzelecki Peaks.

After you cross Fotheringate Creek on the steppingstones, the track starts to climb and soon you will reach Wave Rock. This is part of a lower band of exposed granite bedrock that projects though the talus deposits. Although not as spectacular as the famous Wave Rock in Western Australia, the flared slopes on this giant granite slab are formed by the same process of weathering and erosion.

Flared slopes are a common feature in granitic terrains. They form when the run off from the rain collects in an area adjacent to a granite formation and promotes chemical weathering. Later the weathered granite is eroded away leaving a flared slope exposed on the surface. 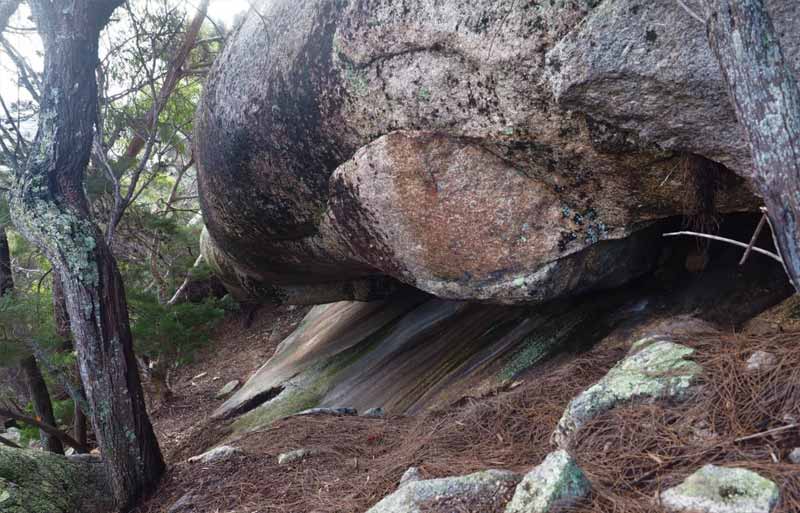 Just above Wave Rock, you will find this distinctive cave. Here the effects of weathering and erosion have focused along a major joint in the granite and have produced a natural hollow. Near the cave, you will find two lookouts.

From the Second Lookout, the walking track continues to climb across the talus slopes and eventually you will reach the Fern Glade. The Fern Glade is a talus filled gully that provides a protected habitat for species that are more commonly associated with the rainforests of Southwest Tasmania.

Man or soft tree ferns (Dicksonia antartica), up to about 4m high are abundant. This genus can be traced back to ancient Gondwanan forests.

As you continue to climb above the Fern Glade, you will get fine views across the valley to a distinctive peak with steep sided granite slabs. This is a dome of exfoliating granite. When a granite is exposed at the surface there is a release in pressure due to the removal of the surrounding rocks. 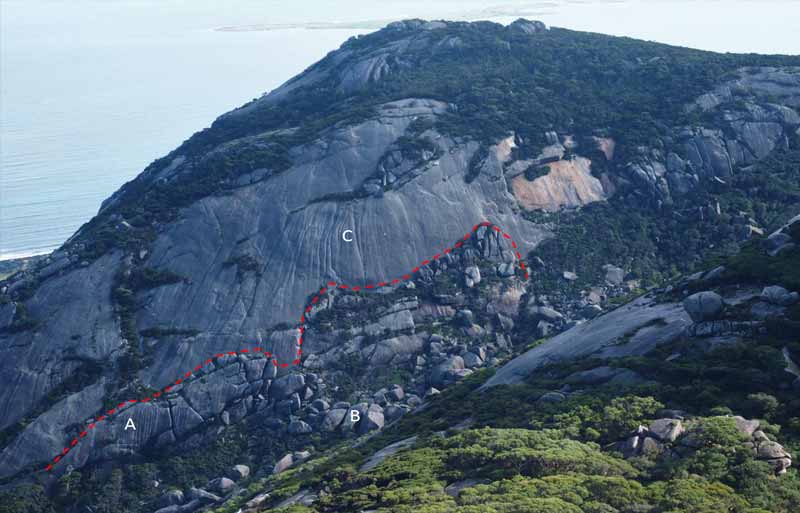 This causes the granite to expand and the formation of new sheet joints, typically parallel to the erosion surface (see red line).

A block stream of large granite boulders produced by the disintegration of granite slabs. These deposits are relatively young and are still forming today. In contrast, the scree deposits on the lower slopes are much older and have developed a matrix of sandy soil and clay. 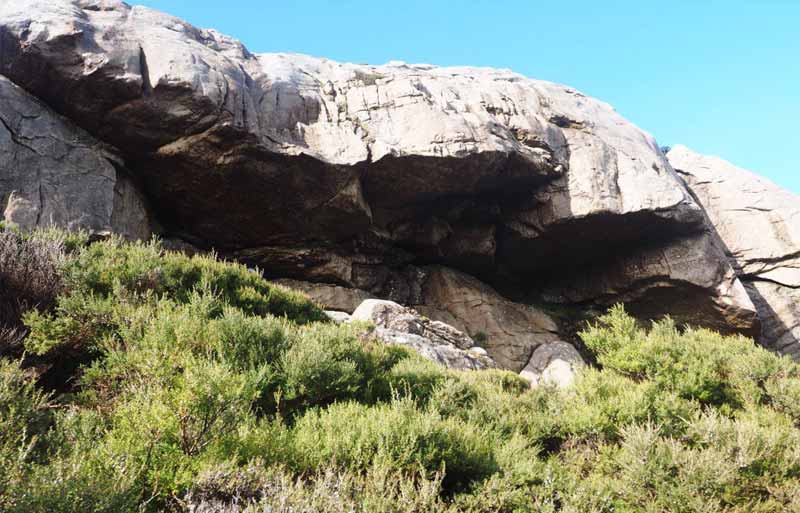 A distinctive overhanging cliff is passed just before you reach the main summit plateau.

Once you reach the ridge crest, look out for small water holes, called gnammas, on the granite surface. The summit of Strzelecki Peaks is the peak on the right. The track continues through a low saddle and the summit, which is easily reached via some nontechnical scrambling, provides panoramic views over much of Furneaux Group. 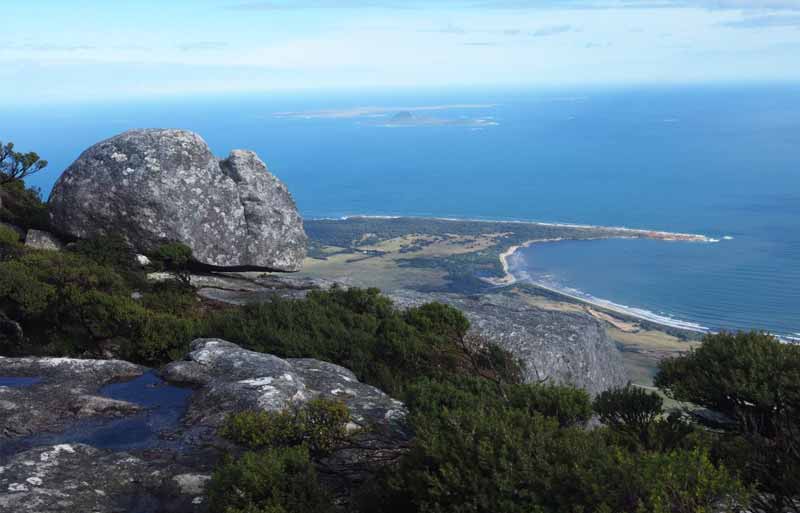 Fotheringate Bay, with Mt Chappell Island and Badger Island in the distance from the summit of Strzelecki Peaks.